A Fazzino Installation in Busan, Korea

Charles Fazzino recently traveled to Busan, Korea to check up on his latest creation – a pair of outdoor sculptures to adorn the front of a brand new shopping center. Earlier this year, he was commissioned by the owners of the Fiesta Mall to create a series of works to decorate the new center. 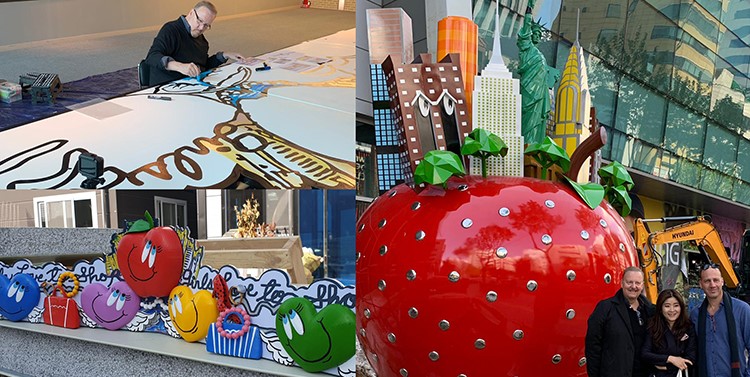 With the execution help of a team of artists and sculptors in Korea overseen by Bruno Art Group, Fazzino designed two 16-foot steel sculptures. Together they are titled “Busan Meets the Big Apple.” One depicts Fazzino’s most famous icon, the NYC big apple, and the other captures the Korean shopping experience. They will sit in front of the mall, book-ending the pillars that define the entrance welcoming in eager shoppers.

Since the conceptualization of the two sculptures, the project has expanded to include two multi-panel murals on aluminum and a steel bench for the inside of the mall. One mural of New York City will consist of five aluminum panels, each one measuring 48″ x 72″. The second, in keeping with the theme of the sculptures, depicts the city of Busan in typical Fazzino 3D pop art style. 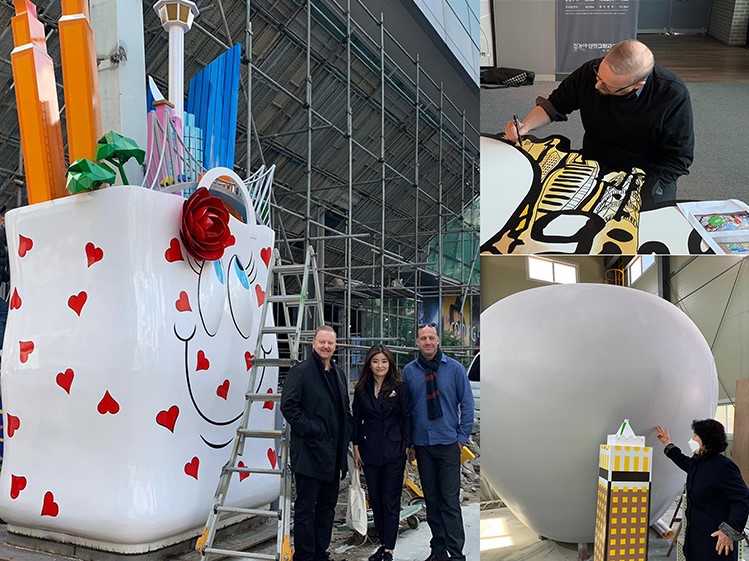 In April, 2019, Fazzino went to Busan to oversee the production and spend a few days with the crew, adding some finishing touches.

“I am grateful to both Motti Abramovitz of Bruno Art Group and Insoon Cho of In & Out Art Korea for spearheading this project. They’ve been the boots on the ground and have managed the entire project. I had seen renderings of the sculptures before but had not seen them live and I was blown away by their size, level of detail, and vibrancy. I’ve long wanted to move into public installations and I’m so proud of these pieces here in Busan. I’ve learned a lot during the course of this project and I’m looking forward to doing more larger-than-life-sized works in the future.”            – Charles Fazzino

While in Busan, Fazzino filmed a short documentary about the project: