On Tuesday evening, New York Mets Greats John Franco and Mookie Wilson joined Charles Fazzino at Citi Field home plate prior to the team’s game with the St. Louis Cardinals to unveil the artist’s commemorative new releases: official art pieces for the 2013 All-Star Game. It’s the 10th All-Star Game for Fazzino and only appropriate that it’s taking place in his home town of New York City.

“I’m thrilled to be working on the All-Star Game this year again and I’m really looking forward to it being hosted here in at Citi Field New York,” said Fazzino.  It’s a beautiful ballpark and the fans are awesome. It should be a grand celebration.” WNBC Sports Anchor Bruce Beck served as Master of Ceremonies for the evening.

John Franco also sat with Charles Fazzino for a pre-game All-Star Game poster signing outside the New York Mets Store. A portion of the proceeds from the signing were donated to the Mets Foundation. The entire 2013 All-Star Game official art collection was on display, including the posters, open edition 3D mini prints, deluxe 3D limited edition prints, and hand-painted baseballs.

The collection will also be on display at the T-Mobile All-Star Fanfest. MLB Fanfest is the largest baseball fan event in the world and will visit New York City in July as part of MLB All-Star Summer. Charles Fazzino will have his own exhibit within Fanfest 2013 and will also be featured by MLB painting live for several hours each day during the festivities. 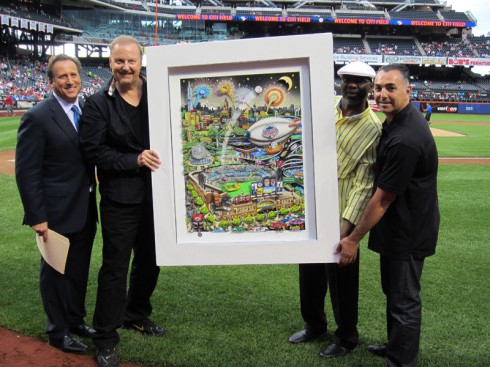 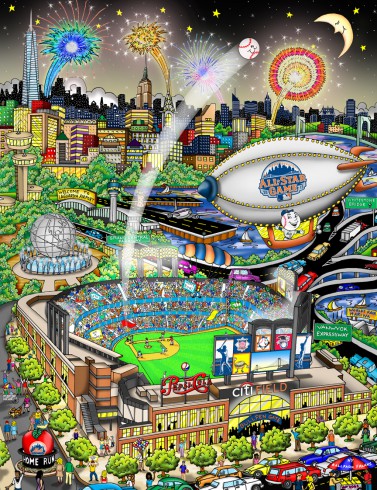