Who Dat’ In New Orleans?

I spent three days in the Big Easy last week and it was a whirlwind. I haven’t been back to New Orleans since the hurricane….it’s like everyone measures time in New Orleans as “pre-Katrina or post-Katrina”…and I was amazed by the energy there. The sense of pride that the New Orleans Saints have brought to the city by being the Super Bowl Champions is incredible.

I was commissioned by The National Football League to do the official artwork for the NFL Kickoff between the Saints and the Minnesota Vikings and started off my week by doing a signing at the NFL Shop for Women. The NFL’s new initiative for women’s apparel is very cool. I couldn’t believe how busy the store was and I met some great people there.

I actually spent the night of the Kickoff game inside the Louisiana Superdome. What a charged atmosphere! It was incredibly exciting to watch the championship banner being hung amidst the sea of black and gold. The fans chanted: “Who Dat….Who Dat….Who Dat Say Gonna Beat Dem Saints” over and over again. It was absolutely inspiring. Then, of course, the Saints, just as it was scripted, went out and beat the Vikings…albeit in a surprisingly low-scoring game.

I spent some time meeting fans and signing the Super Bowl XLIV Saints Championship Art Collection. I If you’re interested in anything from that collection, or any other Saints gear, I suggest you visit the Official Team Site .  I’ll be rooting for ‘Dem Saints….when I’m not rooting for my Giants and Jets….. 🙂 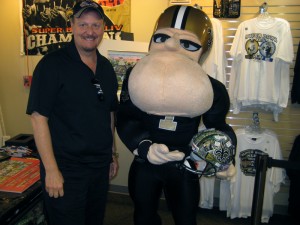 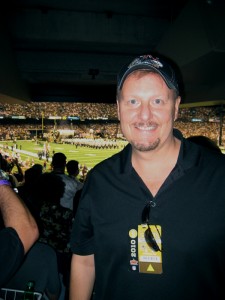