Check Out This One-Of-A-Kind Fazzino Commission

Charles Fazzino recently completed one of the most interesting commission requests he’s ever received – to create a 3D artwork on an artifact from the age of the Space Race in America. Raymond is a certified expert in the history of a whole line of pot-metal mechanical toy banks that were manufactured to honor the United States’ efforts and achievements in space. It is rare to find one of these antique toys in good shape, but Raymond has made it his mission to collect as many as he can find. In fact, he’s donated full sets of these artifacts to several prominent institutions, including the Smithsonian’s Air & Space Museum.

A few months ago, he reached out to Charles Fazzino in an effort to commission the artist to paint one of these historic banks manufactured in the shape of a space rocket – in particular, a Berzac Missile Bank. Fazzino was fascinated and took on the challenge. What resulted was sheer magic. 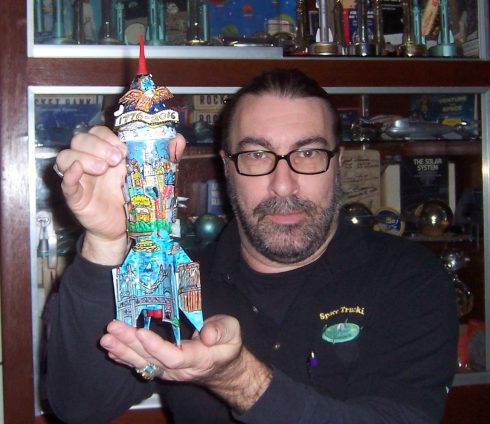 We asked Raymond to share a bit of his knowledge with us and here is what he had to say:

Can you talk about the history of the Berzac Missile Banks?

There were three companies producing the banks between the 1940’s and 1970’s. Two brothers, John and Steven Berzac left one of these companies (Duro Mold) and started a new company (Astro) in their garage to manufacture these banks. In the words of Mr. Cary Berzac, John Berzac’s son: “John and Steven were disgruntled at Duro Mold and both left to venture on their own in 1957. Starting in our garage, wooden, then die cast molds were made of their first creation, The Missile Bank. Both brothers worked other jobs while the final details were put in place to start manufacturing. John did all the work creating the dies to pour die cast material in to create the banks. He also designed and created the assembly line tool work so that workers could assemble the banks in a logical process.  Steven created a sales force and organized an office structure so that the company would have  a system in place to order materials and bill buyers for their products. In 1958, they purchased a building on Groesbeck near Shoenherr in Warren, MI.  Relatives, friends of relatives, and a few loyal ex-Duro Mold employees made up the initial workforce of maybe eight to ten in total.  Success came quickly and orders came in in surprising numbers.For the first four or five years, the Missile Bank was their only product. As best as I can recall, the banks were sold to the financial institutions at $1.25 each with discounts given for larger purchases. Not only were the Missile Banks a local success, with many of the largest Detroit area banks purchasing them, but regional sales stated to grow then sales all over the United States and Canada followed. Sales in Europe and South America also impacted profits. I was told that over 2,000,000 Missile Banks were eventually sold…”

What made you decide to commission Fazzino to create a replica of the Guided Missile Bank?

After Astro Manufacturer closed up shop due to the brothers’ deteriorating health in the early 1970’s, the company which actually applied the finish to these banks (both for Duro and for Astro) ended up acquiring the rights to the molds. Vacumet Finishing produced a version of the Berzac Creation Missile Bank in 1975 which came bare from the factory so that the new owner could paint it themselves. This was the only model out of eight to have purposely come bare from the factory! The sheet of paper stickers which accompanied the banks had a Bicentennial theme to it. So, I thought to myself, “Wouldn’t it be cool if I were to have a famous American artist paint mine?”

What is your favorite thing about the Fazzino replica?

I love how he took my vision and made it burst to life in vivid 3-D! I am thrilled by everything about this work, but especially the bridges at the bottom of the bank. Since I am a Native New York-er, my concept was to represent all five boroughs on this rather small artifact, and each of the four bridges does just that.

How did you get into collecting?

Ever since my boyhood newspaper route I’ve had a fondness for coins and money, and as an adult I started to seriously collect coins as a hobby. Well, that hobby lead to another: Antique Mechanical Banks. When I happened upon a Strato Bank in an antique store, I had to research it because I’d never seen anything like it before. The results of several years of research can be read here: http://www.go-star.com/antiquing/space-banks.htm

What else do you have in your collection?

I have two Peter Max Berzac Bank specimens. My Space Race themed collection also includes over 50 banks signed by Astronauts  and NASA Staff from every aspect of America’s Space Program, from Mercury, Gemini and Apollo through Space Shuttle. My non-Space Race collection consists of various types of vintage mechanical and still banks. I also have a modest Globe collection, including vintage Earth and Moon globes.

What are you plans for celebrating the 2016 Centennial?

As a Native New York-er, I’d love to celebrate one last time in the City, but I don’t think that will happen again in this lifetime. So I’ll just snuggle up with my two doggies and a cup or two of hot chocolate and watch the ball drop on the internet…