On the evening of June 3rd, Charles Fazzino was a guest of honor at the United States Marine Corps Evening Parade at Marine Barracks, Washington, DC. The parade was preceded by a reception in Crawford Hall hosted by the Marine Toys for Tots Foundation in honor of the program’s 75th Anniversary. The Secretary of the Navy, Carlos DelToro was in attendance to unveil Fazzino’s official anniversary artwork. Lieutenant General David Bellon, Commander Marine Forces Reserve and Retired Lieutenant General James Laster, President and CEO of the Toys for Tots Foundation hosted the evening’s events. 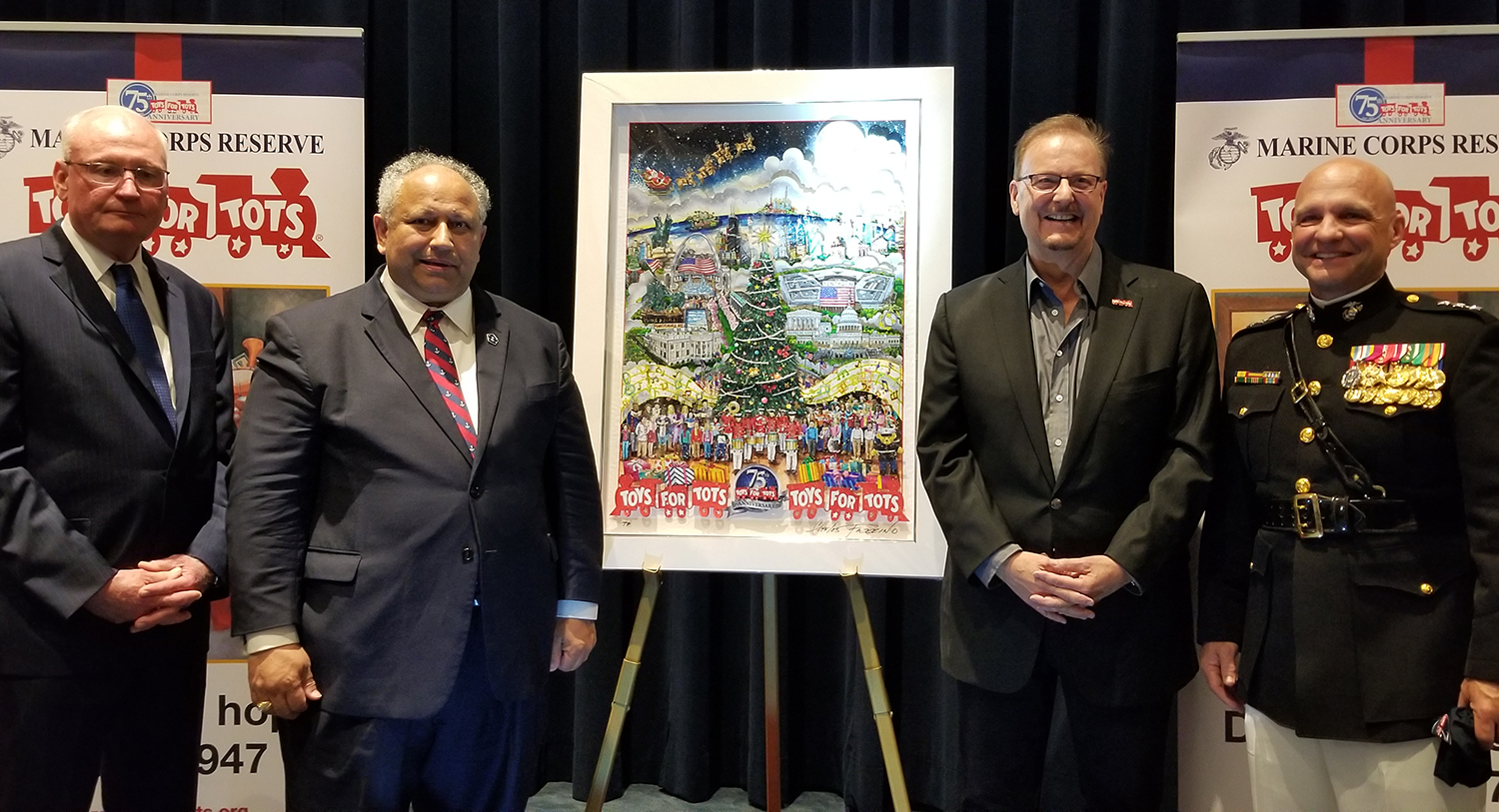 Lieutenant General Laster kicked off the evening by summarizing the results of the 2021 Toys for Tots campaign, the highlight being that more than 8.7 million children received gifts during the annual holiday campaign. More than 270 million children have received gifts since the program was founded in 1947. He then called attention to the more than 800 local active campaigns around the country and thanked the more than 55,000 volunteers, Marines, and Sailors who make the program possible. He then introduced Lieutenant General David Bellon who invited Carlos DelToro, the Secretary of the US Navy, to join Charles Fazzino to unveil the official artwork for the 75th Anniversary Campaign. Charles presented Secretary DelToro with a signed print and talked about how honored he was to be working with The United States Marine Corp and Toys for Tots. 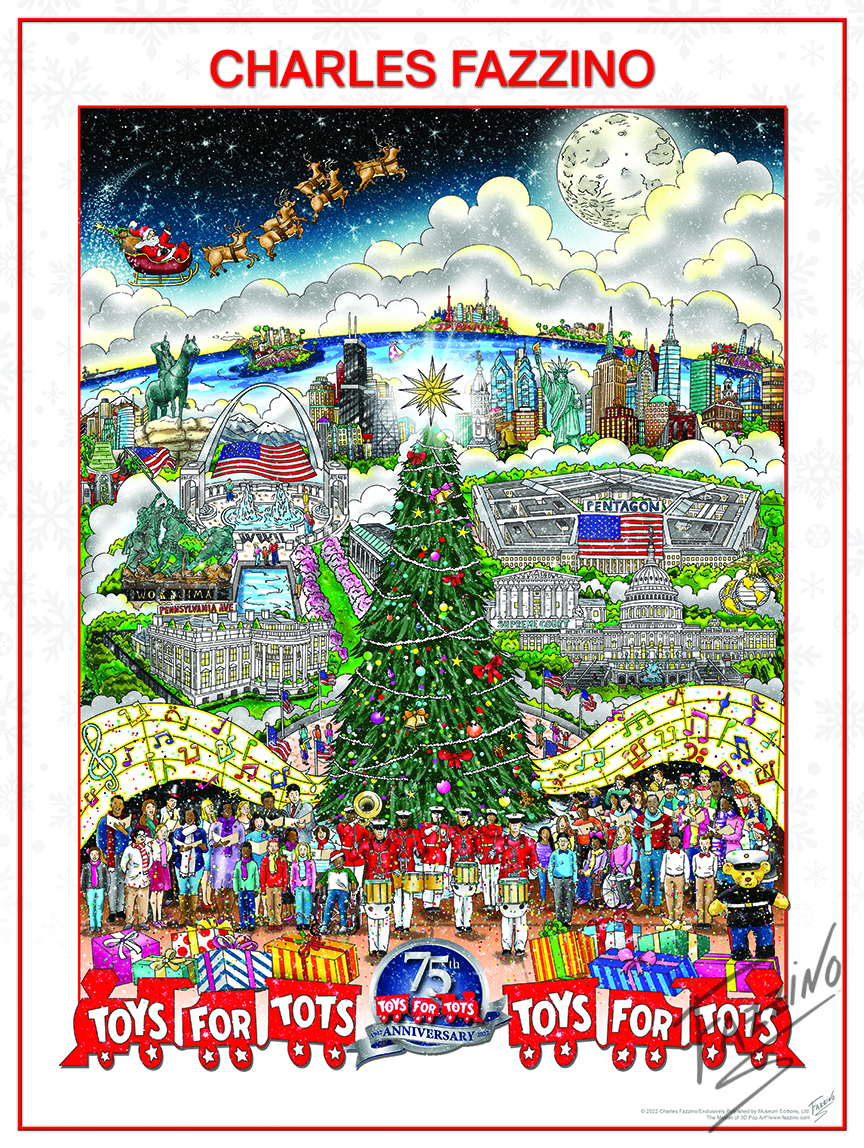 “This is a great honor for me,” said Fazzino. “I hope that my artwork accurately captures the essence of the Toys for Tots mission and all the good that you do throughout the country all year long.” Looking back on the evening a few days later, Fazzino said “It was a perfect evening. The weather was incredible. The parade was a thing of beauty and I was thrilled to have been invited. I don’t know if most people know, but Walt Disney designed the original Toys for Tots logo and I’m privileged to be following in his footsteps 75 years later. It was also great fun meeting Suzi Kelly, who designed the 7th anniversary logo incorporated in my artwork and Corporal Peter MacDonald, one of the last surviving Navajo Code Talkers from World War II. The entire day was overwhelming and I’m just thrilled to be a part of it. In the end, I hope we can bring awareness to and raise funds for this incredible organization.”

The Marine Corps also used the evening to celebrate its historical ties with The Navajo Nation. Executive Director of the Navajo Nation Veterans Administration, GySgt Zwierlein spoke about the great impact that the Toys for Tots Program has on America’s less fortunate children and the Navajo children living on the remote Reservations across the Nation. One of the four surviving Navajo Code Talkers and Veteran Marine, Peter MacDonald was in attendance and received a citation from Lieutenant General Bellon earlier in the day.

All guests were escorted to their field seats on the Marine Barracks to view the ceremonial Evening Parade. 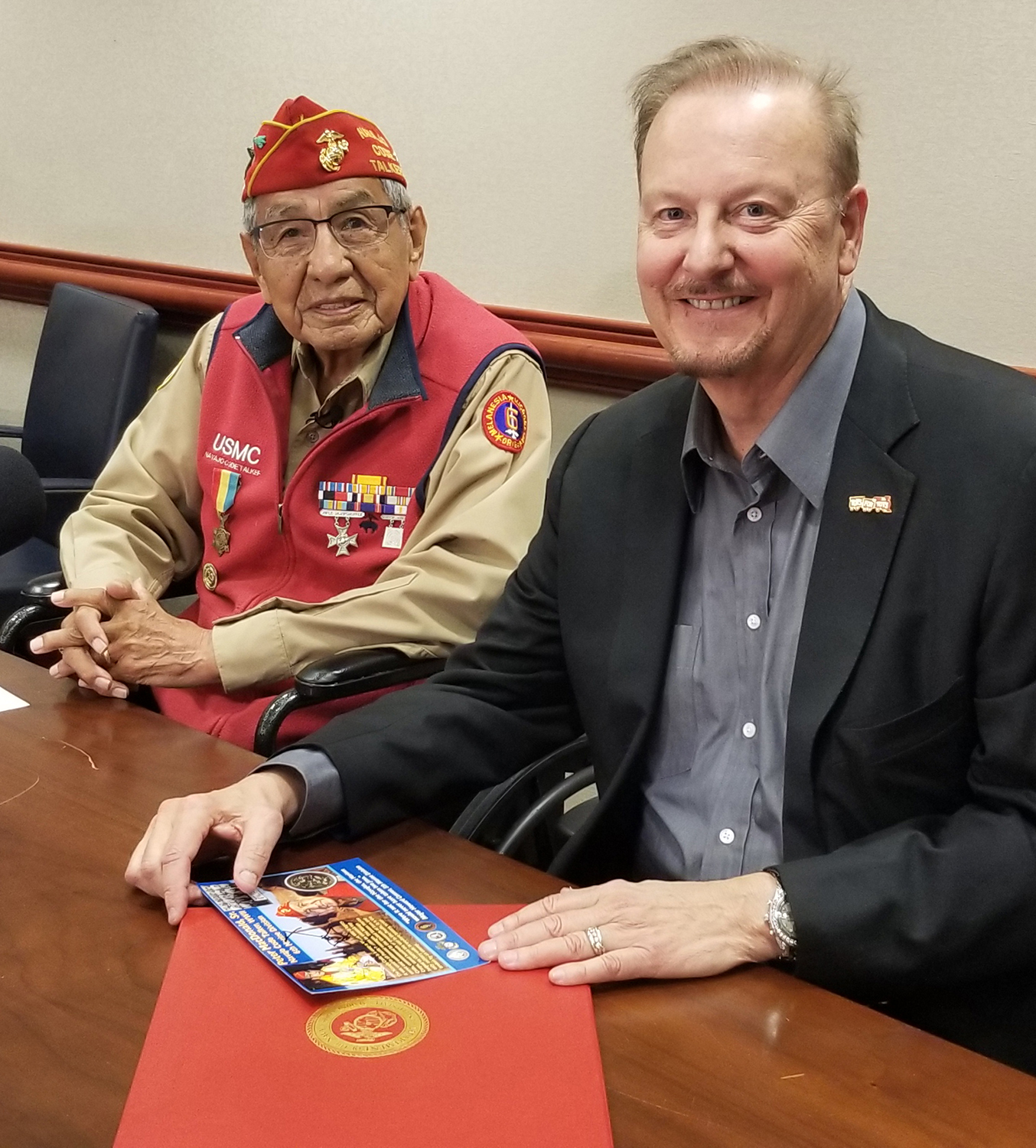 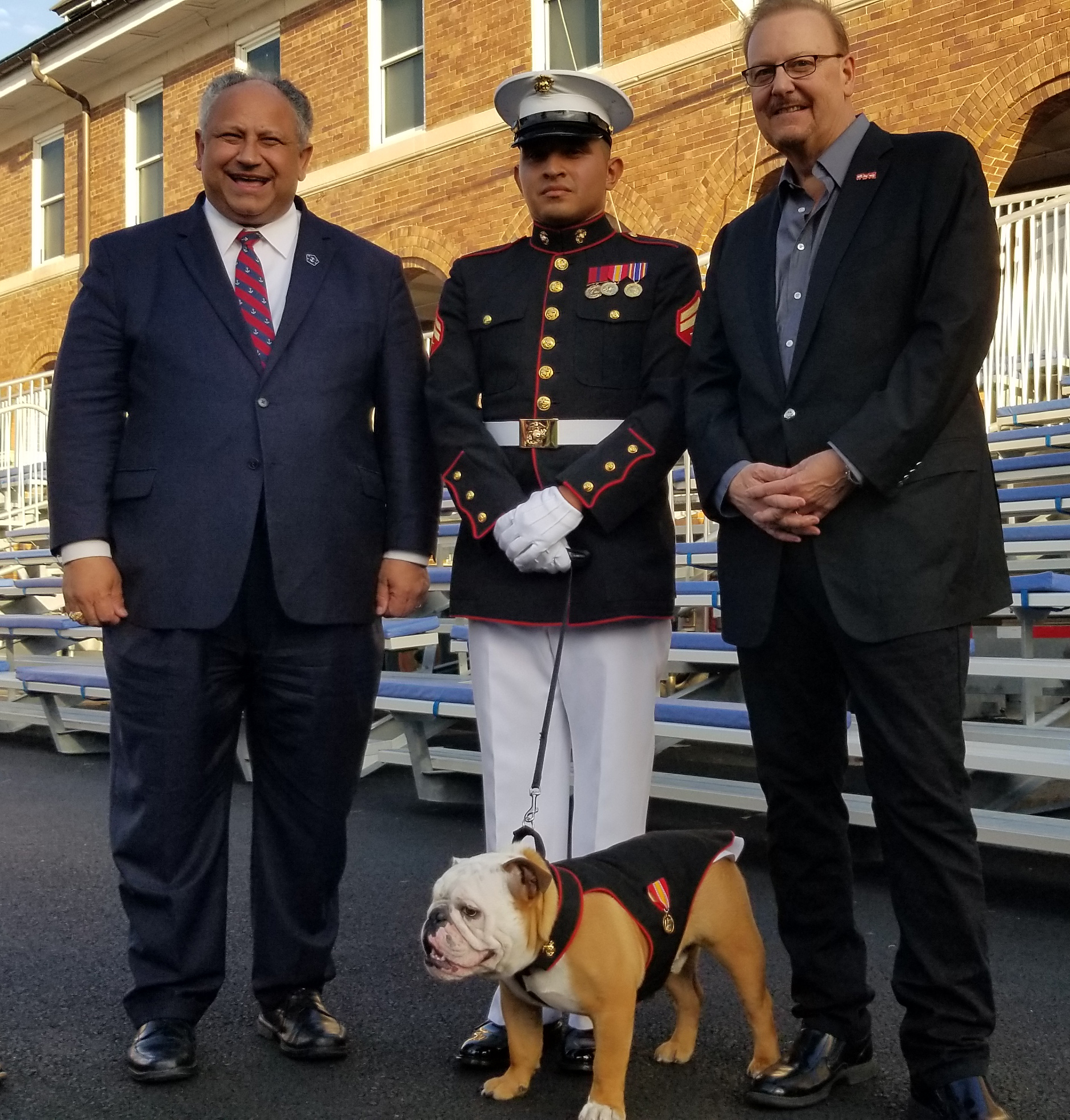 Secretary of the Navy Carlos DelToro and Chesty XVI, official mascot of the US Marine Corp. 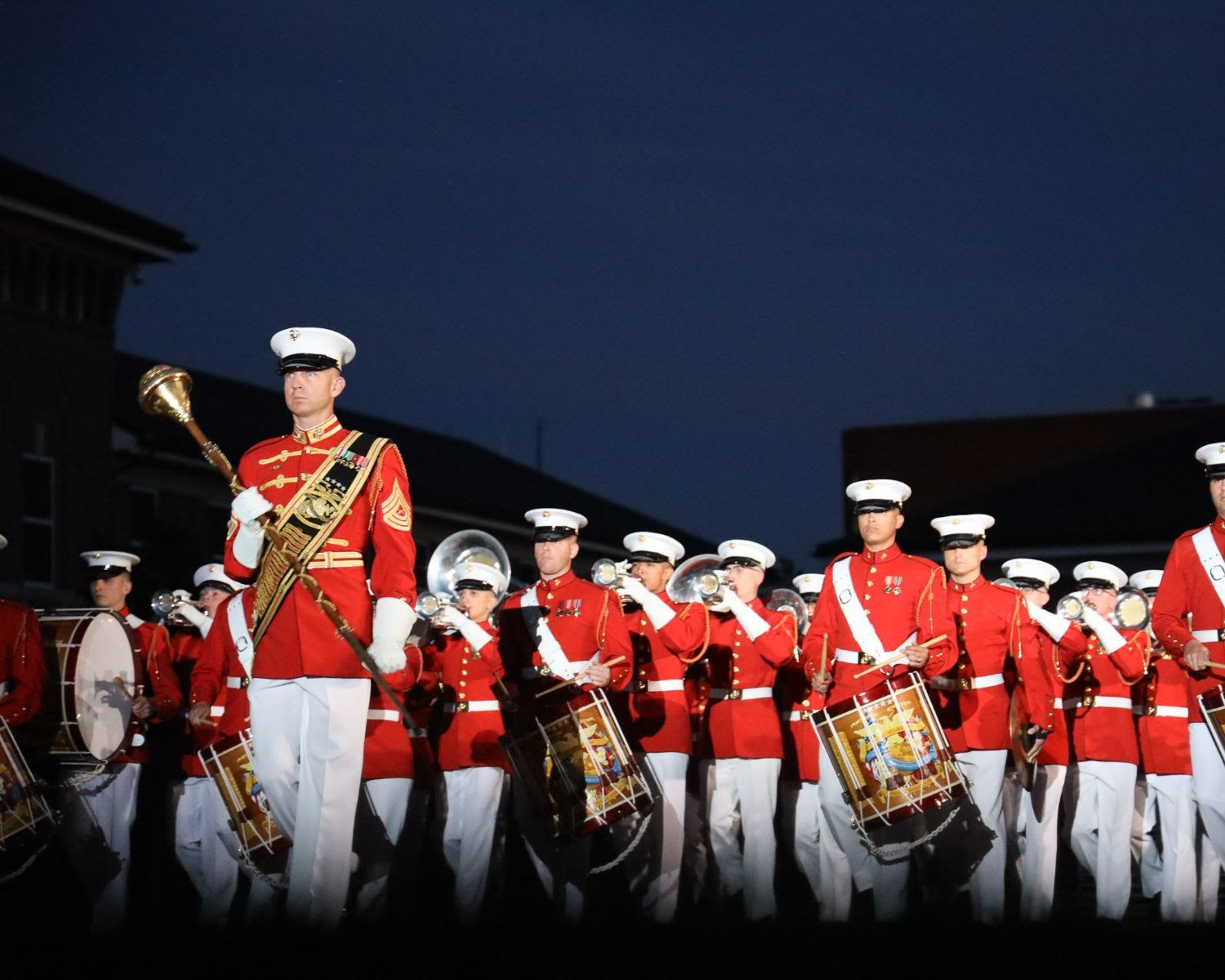 The US Marine Corps Band performs at the ceremonial Evening Parade.

When you donate to Marine Toys for Tots you are helping to bring the joy of Christmas and send a message of hope to America’s less fortunate children.

Donate to the Marine Toys for Tots foundation here.