So, i’ve been waiting to blog about my trip to Pori until i have the picture i took with the President of Finland…but…well…nobody has emailed it to me yet…and there’s a funny story as to why i don’t have it on my own camera. More on that later….

My mom and I went to Pori, Finland last week to attend the Pori Jazz Festival where my work was being featured as the official festival artwork. I had my own gallery for three weeks right on “Jazz Street” and it was an incredible experience. First of all, i experienced the “midnight sun” for the first time. It’s awesome if you’ve never experienced it before. It was light out almost 24-hours a day! We still needed to put on sunblock at 10:30 at night! By midnight, the sun would soften a little bit but it never got completely dark. From what i understand, the Finns pay for it in the wintertime when there are only a few hours of daylight. It gets pitch black by 2:30 in the afternoon….probably one of the reasons for the high depression-rate there. But the summers are incredible.

The festival was hopping! Pori is a relatively small city and it’s size quadrouples during the time of the Jazz Festival. I actually did get out of the gallery to hear some of the music….I saw Booker T. Jones and heard (but didn’t see) Erykah Badu. Duffy was the featured performer and she flew in and out on her own private jet. But some of the best music was heard right on the streets under the tents that lined Jazz Street. They played 24/7 throughout the festival….a lot of techno music…really cool.

Literally thousands of people walked through our two-story gallery on Jazz Street. Mom, being a Finn, was so proud 🙂 For me, it was like in the early days of my career…most of the people had never seen my work before and they seemed to be really interested and taken with the colors and the style. I did a lot of explaining….how i do my work…how i got started…where you can see my work…all of it. It was a lot of fun.

But of course, the highlight was the visit to the gallery by Tarja Halonen, the President of Finland. I had been told a few days earlier that she was aware of my work and was coming to Pori for the festival and that she wanted to stop by the gallery. But nobody told us exactly when she would be arriving. Wouldn’t you know it….not 5 minutes after i returned to my hotel room one evening, i received a call that the President was on her way. I had to sprint from my hotel back to the gallery, sneak around the secret service, and race her limo down the street so that I was in the gallery before she arrived. Of COURSE, i forgot my camera back in the hotel room…hence…the need to wait for someone in Finland to email me the picture before i can show it to you. President Halonen was very gracious and spent more than a half hour with us, touring the entire gallery. It was an incredible honor for me…and for my mother!

All in all, it was a successful trip and a wonderful project to have been a part of. I felt like i had finally done something i’ve waited my whole life to do – make somewhat of a name for myself and my artwork in my mother’s homeland. So many people were exposed to the work and were excited to see it. It was an awesome experience! Of course, the photo of us with the President is yet to come! 🙂 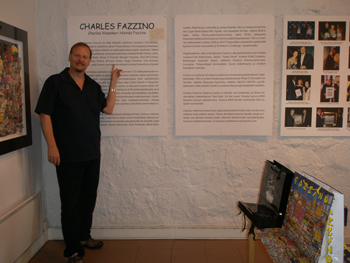 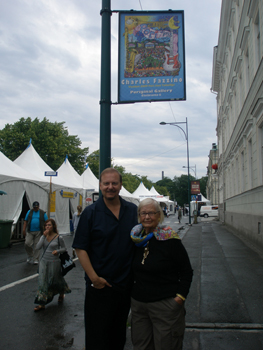 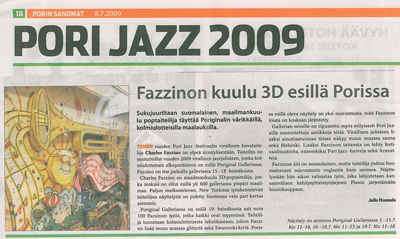