Fazzino’s Super Bowl XLVI Artwork to be Unveiled at NAMOS

A Limited Number of Tickets Available to General Public 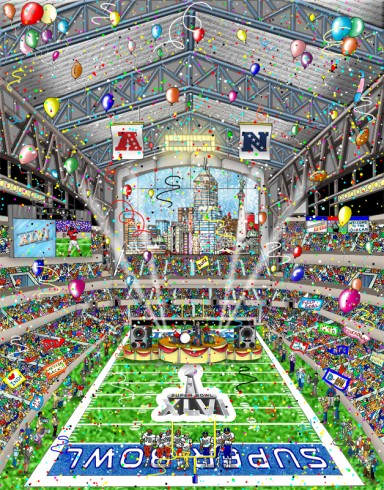 On Tuesday, November 15 from6-9pm, the National Museum of Sport and Indianapolis Colts’ Wide Receiver Reggie Wayne will host a Media and VIP reception featuring the unveiling of Charles Fazzino’s commemorative artwork for Super Bowl XLVI. University Place Conference Center and Hotel is sponsoring the wine and hors d’oeuvres. A limited number of tickets will be on sale to the general public and will include all food and beverages, a signed Charles Fazzino official Super Bowl XLVI poster, and access to the VIP/MEDIA reception for the official artwork unveiling.

Attendees will also have the first public opportunity to view and purchase the Fazzino Super Bowl collection which will include limited edition fine art prints, open edition mini prints, posters, and hand-painted equipment originals. A portion of the proceeds from all sales that evening will benefit NAMOS, as will all ticket proceeds from the event.

Super Bowl XLVI will be played at Lucas Oil Stadium in Indianapolis on Sunday, February 5th and will be telecast live on NBC.

For additional information about NAMOS or to purchase tickets to this event, please visit http://www.nationalartmuseumofsport.org/.