Dali had his Mustache, Warhol his Marilyn Monroe, and Michelangelo his David. Japanese artist Jun Kitagawa has his…ZIPPERS and T-SHIRTS. In some circles of Tokyo, he’s regarded as a nuisance, marking public spaces with his one-of-a-kind paintings and sculptures of zippers and/or T-shirts – an unlikely pair.He’s a bit of a hit and run artist, temporarily dressing some of Tokyo’s most famous sculptures in white t-shirts. When he’s not outfitting sculptures, he’s busy panting or sculpting giant zippers that mark the layers of reality – the zipper hides what is underneath.  The Tokyo government even commissioned him to put his zipper “tag” over some illegal graffiti in the Roppongi Tunnel. 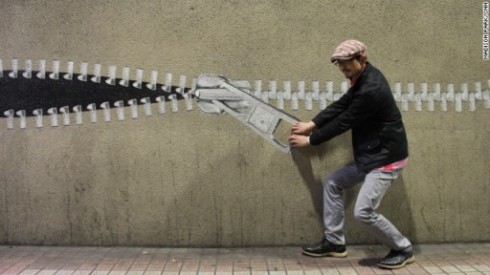 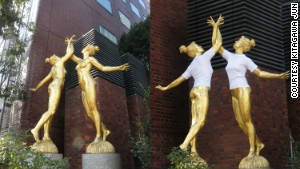 Whether or not you consider Kitagawa an artist, he has found his niche and certainly has people talking about him and his whimsical and sometimes perplexing, public works. Isn’t that what art is all about in the end? What do you think?