Another Fazzino Installation Pops Up in New Rochelle

City, School District and community leaders gathered at the New Rochelle train station on March 24th to celebrate the installation of an oversized, whimsical library kiosk created by 3D pop artist Charles Fazzino. The Fazzino kiosk was the seventh and final one in the first phase of a Pop-up Libraries Community Collaboration spearheaded by My Brother’s Keeper New Rochelle and the New Rochelle Council on the Arts, in conjunction with the New Rochelle Department of Parks & Recreation and the New Rochelle Public Library.

“We are so grateful an artist of such international stature as Charles Fazzino continues to be invested in the cultural dynamism of New Rochelle,” noted Mayor Noam Bramson, who congratulated Fazzino and the organizations that made this community collaboration a reality.

“I’m really excited to have the free library at the train station and the timing couldn’t be better,” said artist Charles Fazzino. “I hope, that as we near the end of the pandemic, that it welcomes all of the commuters back and puts smiles on all of their faces.” 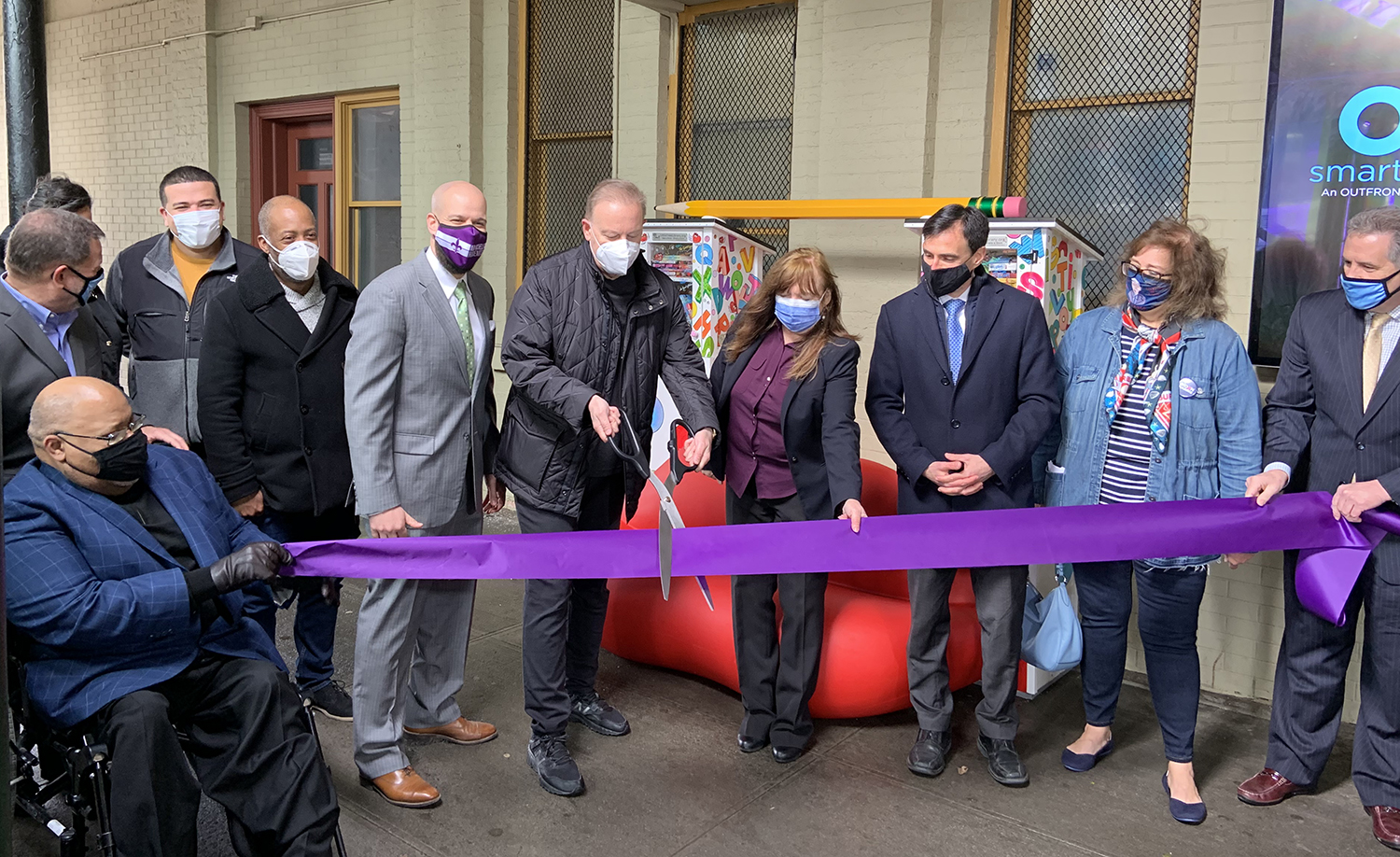 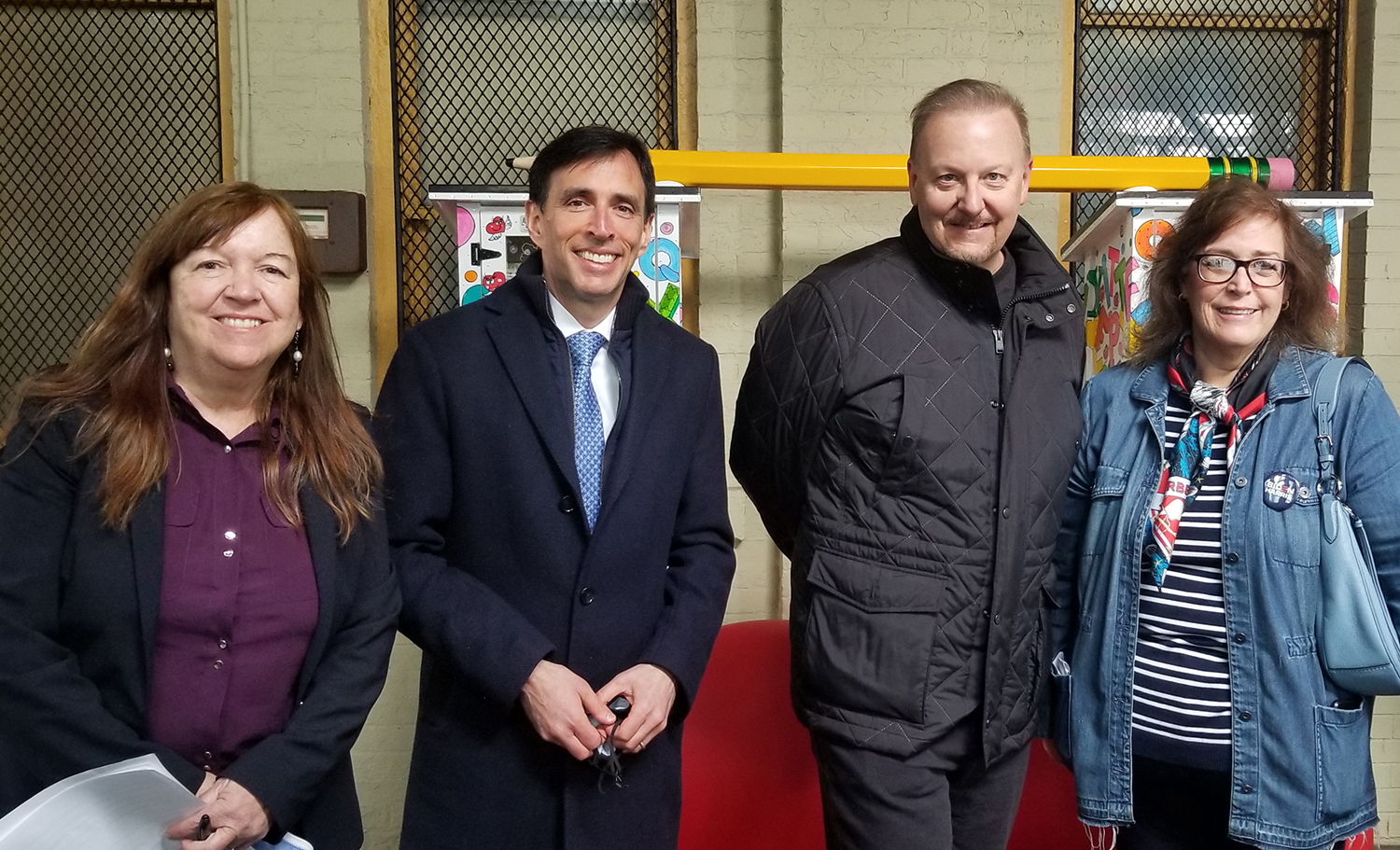 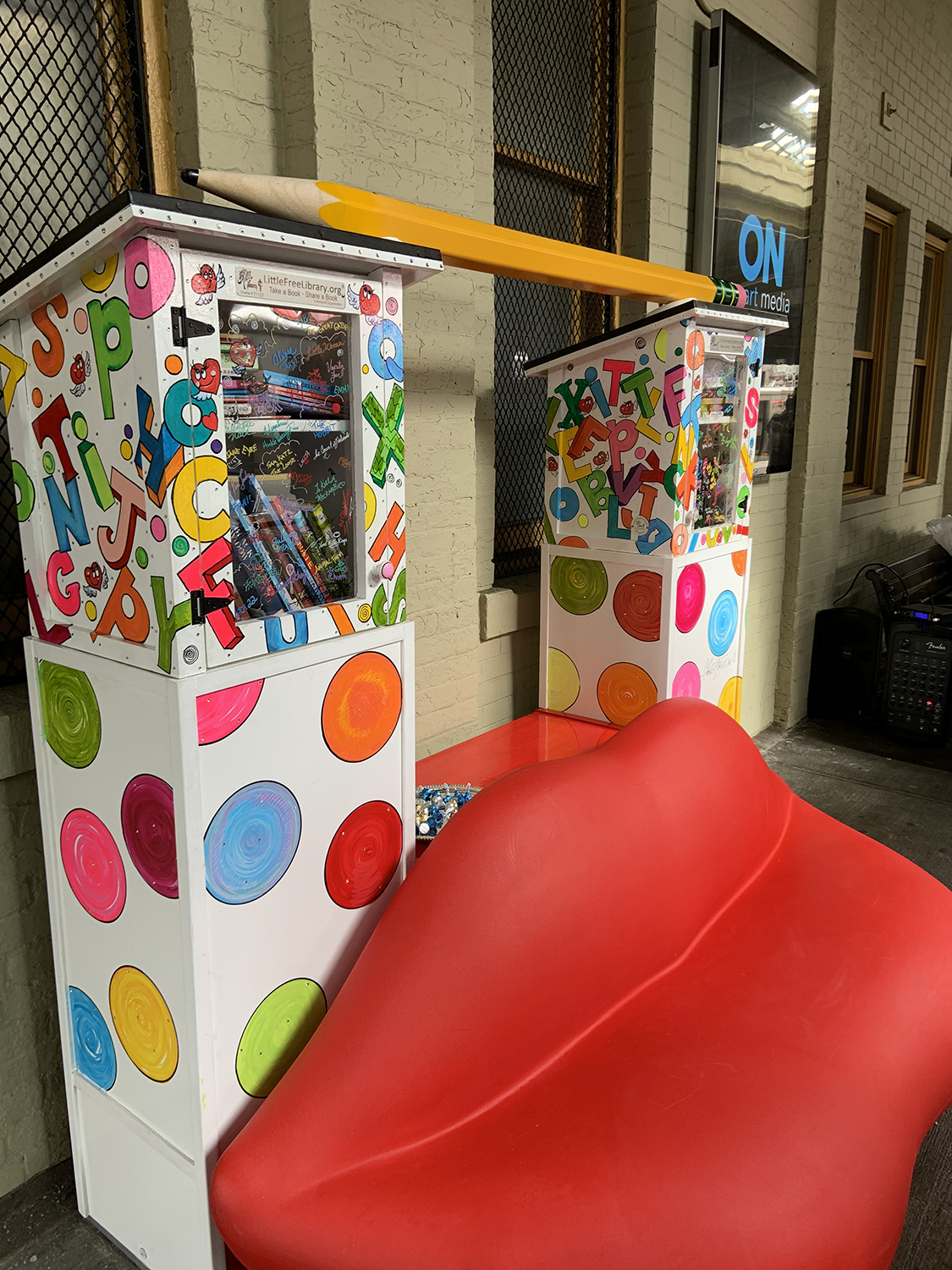 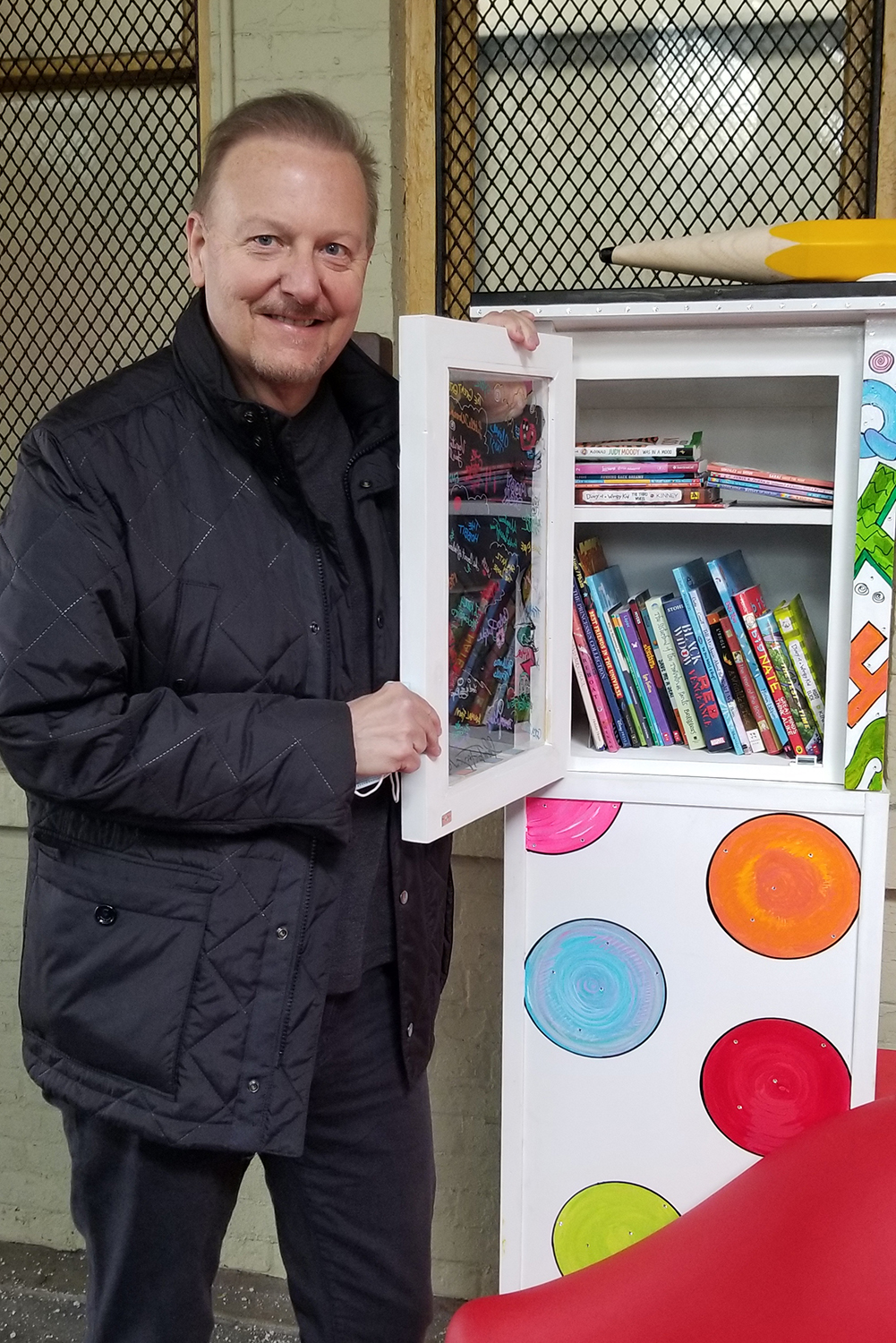 In 2019, the City of New Rochelle joined the “Little Free Library” movement, with “Pop-Up Library” kiosks installed at six locations around the city. The concept behind these book kiosks is simple: Take a book or leave a book. The goal is to promote literacy and the love of reading and to build a sense of community, while also creating unique public art because each of New Rochelle’s library kiosks was embellished by a different artist.

Fazzino’s kiosk features an interactive design that measures seven feet long and features playful built-in seating (in the shape of red lips) so that browsers can sit for a few minutes and read.

“We are so grateful to Charles Fazzino, who designed a unique and inviting kiosk that was placed where he hoped it would be: The New Rochelle train station,” said Colleen Gardephe, Managing Director of MBK New Rochelle. “Literacy is central to the My Brother’s Keeper mission, and this kiosk is all about giving commuters and visitors the opportunity to discover the joy of reading.”

“Charles Fazzino’s Pop-up Library kiosk is a statement piece,” noted Theresa Kump Leghorn, President of the New Rochelle Chamber of the Arts. “We are grateful to the City of New Rochelle for allowing us to place it at the train station, where we feel it reinforces the city’s image as an arts-friendly community that embraces both the visual and the literary arts.”

The Fazzino kiosk will join New Rochelle’s other Pop-up Libraries, installed in 2019 at Glenwood Lakes, Hudson Park, Huguenot Park, Lincoln Park, outside of Columbus School, and at Paws Place dog park at Ward Acres Park. Each has been stocked with books and is maintained by a volunteer “steward.” In addition to Charles Fazzino the artists include Carol Bowen, Cristina Cerone, Alvin Clayton, Laura Heiss, Stephanie Lombardo and Aston LeMelle Thomas. New Rochelle’s Pop-up Libraries project is a collaboration between the NRCA and MBK New Rochelle in conjunction with the New Rochelle Public Library and the New Rochelle Dept. of Parks and Recreation. The project was funded by My Brother’s Keeper New Rochelle, the New Rochelle Council on the Arts and ArtsWestchester. 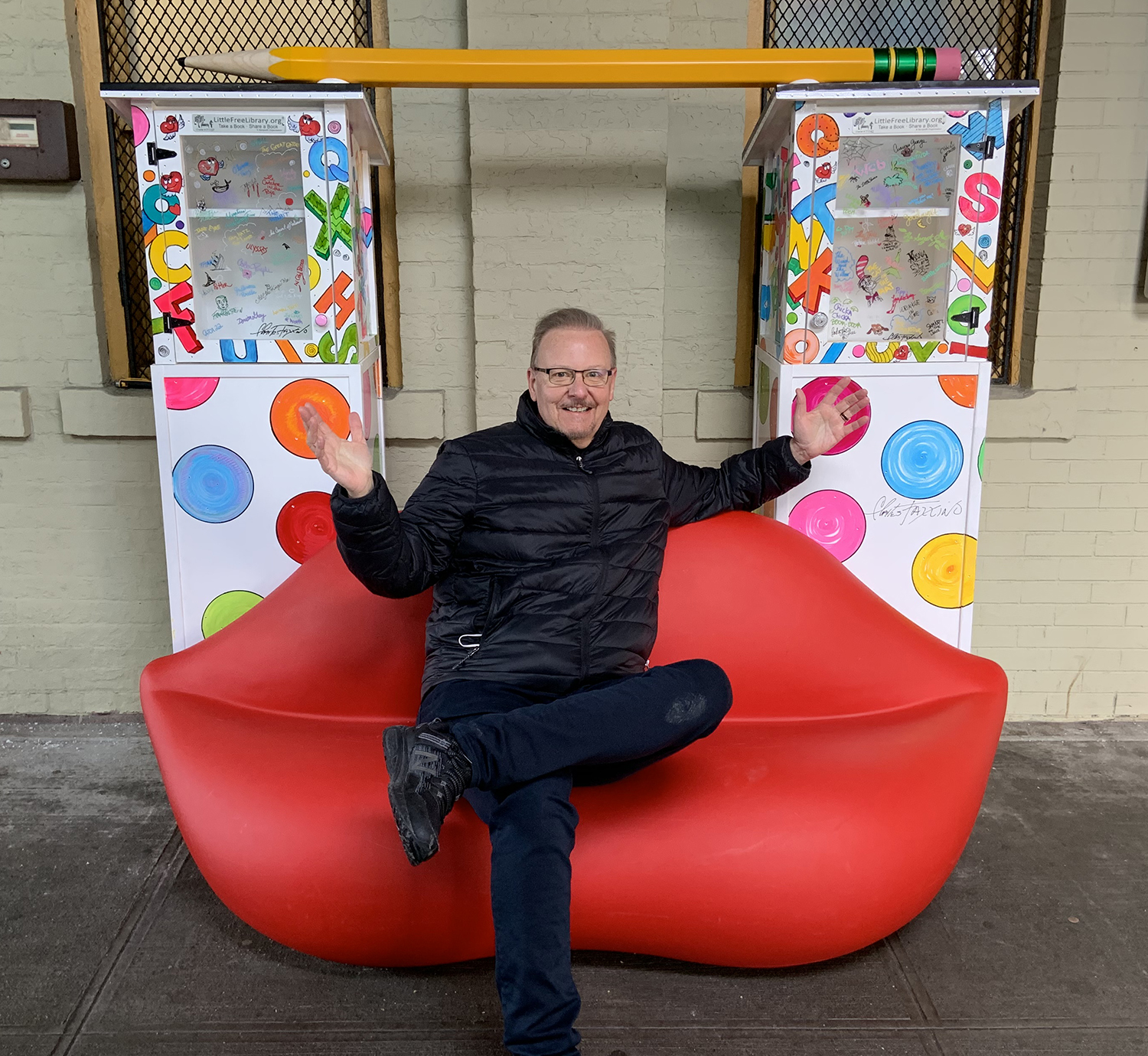