Charles Fazzino has been commissioned as one of 17 international artists to create an artwork featured in the 2010 FIFA World Cup Soccer Official Poster Edition. This is the second time that Fazzino has worked with FIFA, as he was asked to create a limited edition, 3-D work to celebrate the 2006 World Cup in Germany. As the only American artist in the group, Fazzino is part of a world-class group including seven South African artists and artists from Japan, China, Brazil, Senagal, Ethiopia, and beyond.

The series is available for purchase individually or as a complete 2010 FIFA World Cup Collection. Fazzino stated from his New York Studio: “I am honored to be working with FIFA for the second time. Soccer has become, in a sense, the global language for the sports world. Everyone plays it….everywhere. The World Cup brings the nations together every four years, similar to the way The Olympic Games do.  It’s a passionate tournament that has so much significance for so many. I’m glad that through my artistry, I can help people capture those moments forever.”

Project coordinator, Renate Bauer, was recently asked about the connection between soccer and art. She replied that  “art is as much a global phenomenon that speaks a universal language as football. Both also somehow originate from enthusiasm: both can be pursued only with uncompromising passion, talent and effort.”

The entire collection can be seen and purchased at www.2010ArtEdition.de 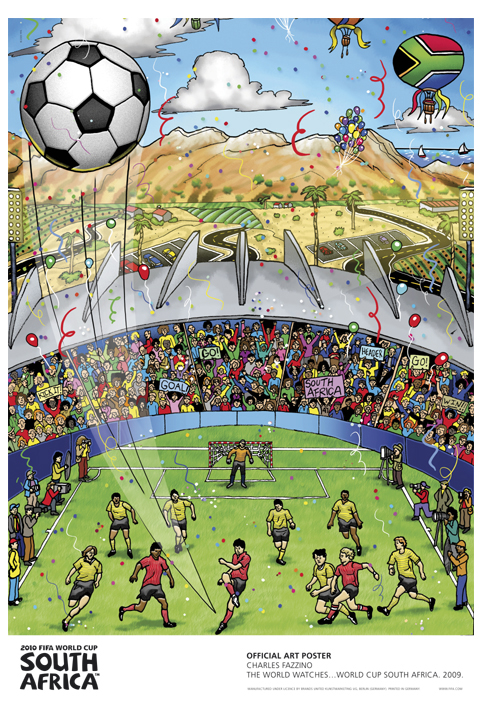 This entry was posted in Soccer Pop Art