It’s been a whirlwind this week down in Miami, where i’m making appearances for Super Bowl XLIV. I’ve done two cigar humidor signings, two national television interviews, a couple of local television interviews, two gallery shows, and i just finished a poster signing at the President’s Dinner at the Seminole Hard Rock Casino/Hotel – a fantastic event!

But the most important appearance i’ve made so far was yesterday, when i did the CBS Early Show with Indianapolis Colts Wide Receiver Pierre Garcon. Pierre, a Hatian-American, started a foundation – Helping Hands – to help those in need in his native country of Haiti. When the disastrous earthquake victimized the country last month, the work of Pierre’s foundation became that much more important. He and I have teamed up to raise money for the relief effort. We have both autographed  one of my hand-painted, 3-D Super Bowl XLIV helmets and it is currently being auctioned on ebay with 100% of the proceeds benefitting Helping Hands. Take a look and bid generously! 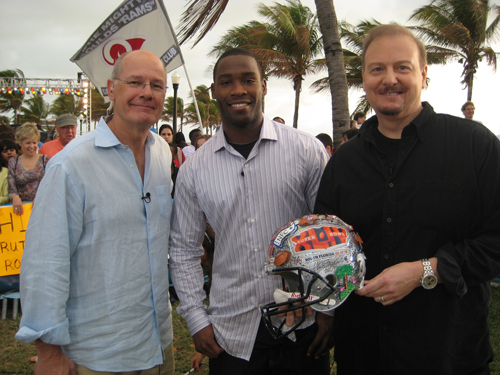