Charles Fazzino recently completed and released his tenth Super Bowl Commemorative Print for the National Football League. On November 17, he will be joined by Miss Florida USA 2010 Megan Clemente and former Miami Dolphin great Kim Bokamber at an unveiling of his newest work hosted by the South Floria Host Committee .  The Media & VIP Reception will feature Charles Fazzino’s commemorative artwork  for Super Bowl XLIV and take place at Bokamper’s Sports Bar & Grill in Plantation, FL.  Super Bowl XLIV will be played at Dolphin Stadium in South Florida on Sunday, Feb. 7, 2010.

“I’m incredibly proud to be able to say that I have commemorated ten Super Bowls in a row,” said Fazzino from his New York Studio. “I remember the first one back in Tampa. We did a poster signing with Desmond Howard and it was a great time. Since then, we’ve exhibited at 7 NFL Experiences, 5 Taste of the NFL Events, a series of Super Bowl gallery shows, several player-hosted charity events, and the official NFL Superstore. It’s been a fantastic ride and I feel like we finally have a whole collection to show.”

During the week leading up to the Super Bowl in South Florida, Wentworth Gallery will host two art shows in Boca Raton and Ft. Lauderdale, and Fazzino will also appear at the Taste of the NFL and a series of other events. Stay tuned for more Super Bowl news to come! 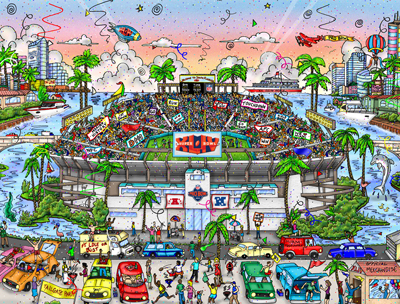 This entry was posted in Football Art Super Bowl Art