Could Stealing Fine Art in a Heist Be Your Get Out of Jail Free Card?

Did you hear about the recent theft of millions of dollars of original paintings from the Kunsthal in Rotterdam? It was all over the news this morning. They stole Picassos, Monets, Matisses and more. Amazing, right? Every so often you hear about major thefts like this. I’ve always wondered just who might steal art and what the heck they could do with it after the got it. Well I was watching CBS This Morning today and they were interviewing former FBI Director John Miller. I absolutely loved his analysis of art thieves. After painting the romantic picture of the art thief as debonair and daring like in the movies, he then revealed that “the real art thief…is usually a knucklehead. They are great burglars and thieves. They are lousy businessmen.”Now THAT was funny. He actually answered the question that i think most people ask when they hear about the theft of expensive artwork. Just what does the culprit think he’s going to do with a famous painting? How is he going to sell it?

Well, according to Miller, one of three things happens. Either the burglar tries to sell the artwork and invariably finds an undercover FBI agent to sell it to….oops. Or, he approaches the company that insured the painting and tries to scam them….but my absolute favorite scenario is that the painting ends up in a garage where the criminal stores it … intending to use it as his “get out of jail free card,” using it to barter his way out of trouble the next time he gets arrested for stealing something else! I laughed out loud. That’s great. Who knew that a Picasso could be your insurance card against jail time. You just can’t make this stuff up! 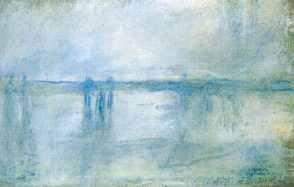 Monet’s Charing Cross Bridge – One of the Stolen Works

You can watch the clip for yourself at www.cbs.com.