Evidently ArtPrize is in it’s fifth year, but frankly, we’ve never heard about it before…and we love it! Running from September 18th through October 4th, it’s the largest international art competition in the world. Based in Grand Rapids, MI, ArtPrize invites artists from all over the world to partner with venues in Grand Rapids to display their artwork for the duration of the 19-day festival. Originally conceptualized as a social experiment by founder Rick DeVos, ArtPrize was designed to see what would happened if the largest art prize was given away based on popular vote. Needless to say, it was a success and since it’s inception, more than 1.7 million people have cast votes during ArtPrize.

After 16 days of voting in the world’s largest art competition, the results are almost here!

Each year, hundreds of thousands of people descend on Grand Rapids to take part in this massive public art project and community event. This year alone, more than 1,500 artists have submitted works that are currently being shown in more than 150 venues around the area. When all is said and done, it is expected that over 400,000 people will have participated in this year’s event alone. $360,000 is awarded based solely on popular vote, while an additional $200,000 is awarded based on the votes of a professional jury.

What began as a “what if” has turned into an international public arts phenomenon, giving thousands of artists around the world a voice and exposing hundreds of thousands more to the wonders of public art.

Here are the top ten entries from last year. Stay tuned, we’re only a couple of hours away from this year’s results! 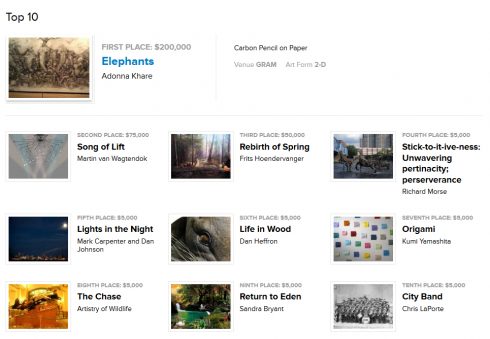 This entry was posted in Art Show