A few weeks ago, we were contacted by Orla, a student doing her masters in art history at The University College in Dublin, Ireland. She was writing an essay about different artist portrayals of the Twin Towers for a module on Manhattan and was including an analysis of Charles Fazzino’s 2001 work United We Stand. We gave Orla some information and she spent a few minutes on the phone with Charles. In her essay, she wrote about Charles’s work along with the riveting New Yorker Magazine cover after 9-11, and Banksy’s 2013 temporary Twin Towers installation on Jay and Staple Street in Tribeca. We thought we’d share her Fazzino analysis with you. Personally, we think Orla deserves an A+:

On September 11th, 2001 Manhattans famous skyline radically changed forever. Following these horrific events, many people turned to creating art works to grieve or comprehend the attacks in their own way. Some wanted to show strength for those who needed it the most, and others wanted to showcase hope for the future that New York’s light would not be dimmed because of these events.

…The Twin Towers were not popular amongst artists and also by most civilians when they were first built. The concept of tubular construction was relatively new with the World Trade Center. Perhaps this is why they were undesired and not favoured by the art community before the attacks. They were described as “ugly, awkward, but functional.”

…His [Charles Fazzino’s] piece United we Stand, New York Twin Towers 2001 was created after the events on September 11th 2001. He has explained that the majority of artists at the time needed to work out their emotions through art and this is what he did. He stated that because he felt helpless he needed to create a piece of art during this unsettling period.His image is in complete contrast to Mouly’s depiction [New Yorker Cover] of the towers as Fazzino’s image is bright and colourful. He represents the Twin Towers in a proud and patriotic sense. The three eagles which are America’s national bird can be seen carrying the American flag to the Twin Towers to suggest strength and support. The angels symbolize all of the victims who sadly lost their lives that day.

The difference between this image and Mouly’s image is that Fazzino places the towers within Manhattan, taller and bolder than all the other buildings. He demonstrates a sense of community and culture as he places them on the island surrounded by all that represents New York. When asked what he thinks the colours of the image add to the meaning, he stated that colour is definitely “an indication of spirit and feeling”.  His collectors have told him that they collect his works because they make them feel good, which is exactly what he has accomplished with this image.

At a time of despair he uses an uplifting image to encourage hope for the future. Rainbows are often believed to symbolize peace and hope. In the bible, a rainbow occurs straight after the great flood. God creates the rainbow as a promise to Noah that no such occurrence will happen again. Therefore, this suggests that Fazzino could be using the rainbow to insinuate towards the American’s power to guarantee that this event will not occur again. Rainbows appear after dark times have passed, symbolic of the attacks.

According to a Fazzino associate, this piece “pays tribute to the victims and the heroes of that horrible tragedy and to memorialize the twin towers.” She explains that it is a celebration of the towers along with New York City as being the centre of the world. In his depiction, the towers are protruding from the island of Manhattan and are larger than everything else around them, indeed suggesting that this area is the centre of the world. In his works Greetings from New York 3-D  and In a New York Minute 3-D we can see the towers towards the background of the image. They are overshadowed by crowded Manhattan and not much emphasis is placed on the towers. Perhaps this is how the people of New York saw them before the attacks. Whereas in United we Stand, all emphasis is placed on them. The other buildings are those that blend into the background while the towers dominate the island of Manhattan and the world. Mouly’s piece [New Yorker Cover] shows the more vulnerable side to the towers and demonstrates that they were real and that they could be broken. United we Stand showed that New York could and would come back stronger than it had been before. It proved that New York had a brighter future and one that is here today. 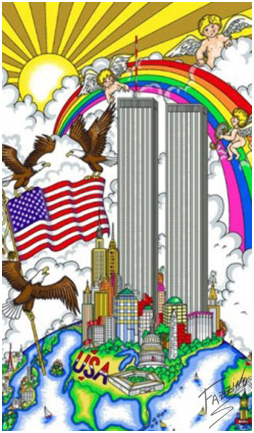 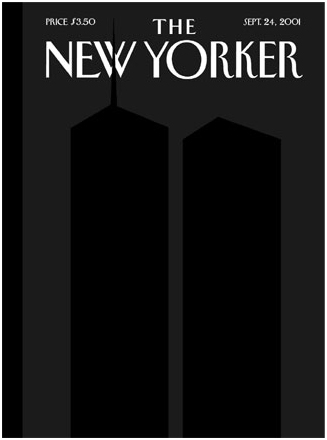 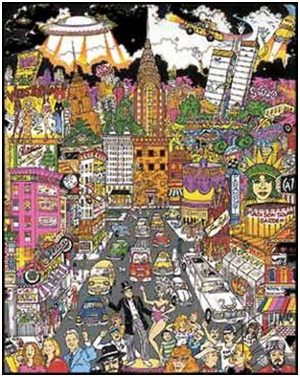 In a NY Minute