Ric is one of the best mixed-media/photographic artists we’ve met. He has incredible vision and an ability to transform the real world around him into something even more beautiful, emotional, and moving. Take a look.

The Power Of Photography

Initially, Ric resisted jumping on the “digital bandwagon” as he calls it. However, over time, he’s realized that the implementation of digital effect has actually made him a better photographer. It’s allowed him to play with images and interpret them in a way that couldn’t be done before.

As Ric explains, sometimes his insight comes from aphotograph and sometimes it’s from the discovery of a new digital technique. “The inspiration comes from many different sources. Sometimes an image just talks to me and I want to try to do something to it, sometimes I see an interesting process and think about which photo I have that it will work on.”

For example, The boy in the cemetery came about when Ric was studying out a bunch of images. He saw a picture of the boy and for some reason, felt that he belonged in a cemetery. The cemetery is the Recoleta in Buenos Aires and the the trees in the background are from a street in Brugge, Belgium. The boy has has writing on his body – writings that tell of the regrets from his past life and the reason that he continues to haunt the cemetery. 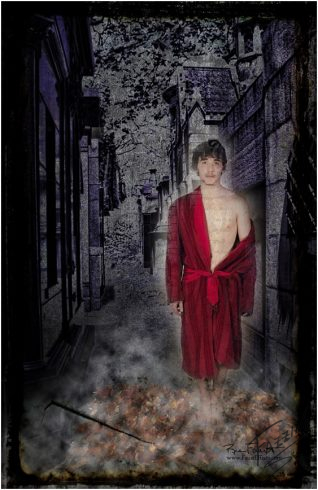 The  man and woman in this picture are actually  tango dancers from Buenos Aires. They are fixtures at the Sunday flea market and Ric decided that a watercolor treatment was perfect for them. We agree. 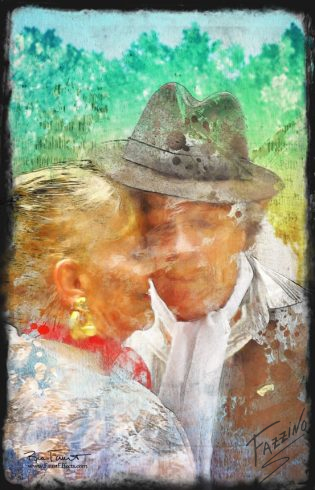 Ric recalls how one of his favorites came about. “The girl with the umbrella came from a photo meetup I did in Boston. It’s always been a favorite of mine because there’s a woman walking by in pink that matches her umbrella. I liked that the woman was in motion, but the girl was blurred too, so I couldn’t display it as a photograph. I decided to give the piece a juxtaposition in that the painted girl is looking at the real girl. Since she was carrying the umbrella I decided to make her part of the world raining.” 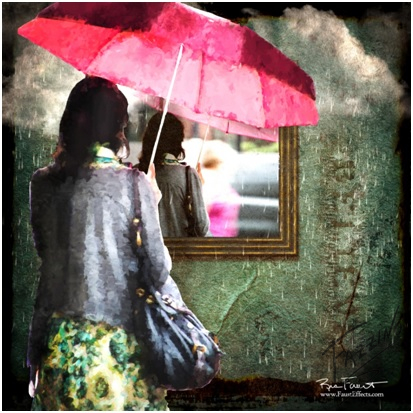 Ric has successfully fused the images from his imagination with the images he see in the real world, giving each a unique twist. If you’d like to see more of his work, visit his website at www.fausteffects.com. Enjoy!