When i was in Paris last week, i had the opportunity to visit the Edvard Munch exhibit at the Centre Pompidou. What an amazing exhibit….it was strange though. I saw so many Munch paintings that i had never seen before. Being most famous for The Scream, you would have thought that would be the centerpiece of the show. It wasn’t even there!

There were almost 100 of the most incredible Munch works i’d ever seen. Many of them were huge, mural-sized paintings and they looked beautiful in the galleries of the Centre Pompidou which are extremely airey, open and very modern in design. I couldn’t believe the number of self-portraits there were. Apparently, Munch painted himself hundreds of times over the course of his lifetime. It led me to wonder what kind of artist he was, being so fascinated with his own likeness. I’m not sure if that speaks to an egotistical streak or an insecure streak? Was he that proud of his own image or was he that determined to make sure nobody ever forgot what he looked like?

Then there were the images that he delved into over and over and over again – scenes like the sick child with the mother/grandmother looking over her. He used that image in many different paintings in many different sizes and using different forms and techniques. I’m guessing that he did so because it was a particularly popular image among his collectors and he needed to have many of them to make sure there was always one in his exhibitions. He was very popular and had many exhibitions going on at the same time. So, he repeated his strongest paintings and gave them multiple lives. I understand that as an artist. Sometimes you paint something that resonates with the audience. You get it just right and you want to use it again and again because it tells the story you want to tell again and again. I tend to repeat certain elements in my compositions; replicate the placements of certain buildings and how they relate to each other; particular traffic and bridge scenes. The just “work” and i want to use them more than once.

I also found it interesting that so much of Munch’s work has a dark and depressing feel to it. So much art about murder, sickness, and sadness. His dark palette was a big factor in creating that feeling. I sometimes wonder if that’s because he was Norwegian. It’s so dark and cold there for so much of the year. I wonder if his paintings reflect the depression you sometimes here about in environments like that. I find it particularly interesting because my work has recently found its way into Norway (thanks to the efforts of my distributor there, Olav Holm) and i find that there’s an unexpected love of color there. The people have brightly painted homes and they gravitate to the bright colors in my work – do different from Munch. I just find that particularly interesting.

There is a richness to the life and career of Edvard Munch that i believe anyone would find interesting. Take some time and visit with his artwork sometime, either on the internet or at an exhibition. I highly recommend it. 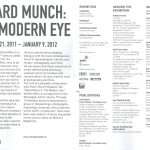 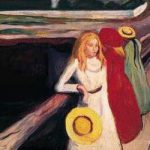 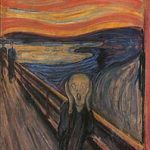 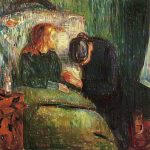 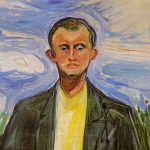