Fazzino, Strawberry, and Franco at Citi Field, Home of the Mets

I had an amazing time last night at the home of the Amazin’s! We did two signings and one live art project…and took in a great ballgame….all in one night. The legendary Darryl Strawberry joined me outside the team store for a poster signing. I brought him an original home plate I painted commemorating his career and he autographed it. Together, we donated it to The Mets Foundation and it’s currently being auctioned on Mets.com to benefit the Foundation. Take a look and bid generously.

It was the first time  I had met Darryl and he was such a pleasure to work with. I was impressed by how much the fans adore him. He was mobbed getting into the signing and out of the signing, but he was gracious and every bit the superstar you would expect him to be. It was an honor to sign with him.

After the store signing, i went up to the Delta Sky360 club and created a second home plate live in front of the crowd. John Franco, who helped me unveil the artwork at Citi Field last season, joined me up there. We hung out, chatted and signed some more autographs. He signed the home plate i was working on up there and that will also be auctioned off on MLB.com to benefit The Mets Foundation.

After the signings, my wife and i watched the Mets whip the Phillies! It was a fantastic game and a great ending to a great night. It was nice all of you who were at the stadium (a special hello to the Pin Man- loved your helmet) and for those of you who weren’t, make sure you check out the exhibit/sale of my Mets Art Collection in the Mets Hall of Fame & Museum the next time you get over to Citi Field. 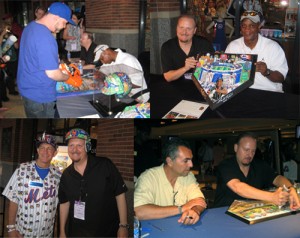 This entry was posted in John Franco