The excitement from Super Bowl XLVIII is winding down, but the celebration continues in Seattle. Between Family Day at the NFL Shop at Macy’s Herald Square and multiple signings with NFL players, Fazzino sure had a busy week. Below is a clip of him with NY Giants Great Antrel Rolle on Fox Sports Online.

Antrel joined Charles Fazzino for an autograph signing session at the NFL Shop and hundreds of fans lined up for a signed Super Bowl poster. It was one of several highlights for Fazzino during the week, including signings with NY Jet Quinton Coples and former NY Giant Punter Sean Landetta.

In the end, it was all about the Seahawks and the fans relentless chants of “GO HAWKS” and “Sea…….HAWKS.”  We extend our condolences to the Broncos and their fans but congratulate the city of Seattle on bringing home the Lombardy Trophy. 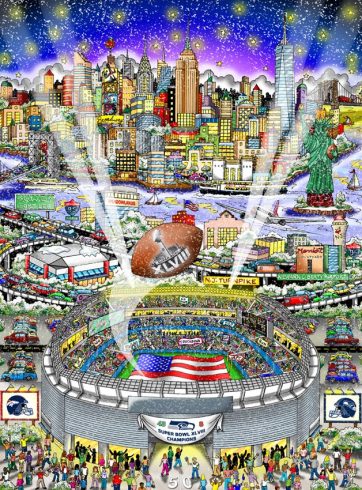