More on the Importance of Arts Education

It’s been a little while since i’ve blogged about arts education. With the elections nearing closer, there’s no better time than now to once again get up on my soap box and urge folks to support candidates who support the arts. The reality is that the economy and jobs are at the forefront of the election news….and they should be. But that’s exactly where the arts fit in. I recently read an opinion piece by Janet Langsam, the CEO of ArtsWestchester. Her article was a very strong and concise argument on behalf of arts education, siting several sources on the subject. The essence of her argument was that not only do we have an employment problem in this country, but we also have a creativity problem.

She started by pointing to a segment on the Today Show (a segment i happened to see also) during which anchor Matt Lauer referred to college arts degrees as potentially useless in today’s job market.  There are more than 100,000 kids graduating with arts degrees every year in this country and i would be one of the first in line to say they are absolutely NOT wasting their time and money. Ask any business leader today what is lacking in our workforce and he/she would say “CREATIVITY.” So, if that’s the case, why are we doing everything we can to stifle creative endeavors in our educational system? Janet Langsom quoted a recent Newsweek magazine article that polled 1,500 CEO’s, the majority of whom sited “creativity” as the “No. 1 leadership competency” of the future. Just where is all of this creativity going to come from?

Lastly, there is also a direct need for arts students as pointed out by Langsam, when she writes “…according to the Americans for the Arts website, there are a growing number of jobs out there in creative industries that range from museums to symphonies, and theaters to small for-profit film, video, music, architecture, digital games, and advertising companies. So one doesn’t necessarily need to land a leading role on Broadway to use their arts degree. Nationally, there are 904,581 businesses in the U.S. involved in the creation or distribution of the arts that employ 3.34 million people.” According to the site, this represents 4.25% of all businesses and 2.15% of all employees. So i ask again….why the assault on the arts?

My staff and I recently conducted a 3D art master art class/workshop at the American School in London during the Olympic Games. I spent a few hours working with the kids and teaching them about the 3D art process. And the same thing happened there that happens whenever we do these classes. All of the kids enjoy themselves, but there are inevitably one or two students who are just completely absorbed in the project. It’s like a light goes on in their minds….we’ve presented them something with which they can relate…an endeavor they can see themselves doing in the future. When i see that light go on, the feeling of gratification is unmatched. I know i’ve just worked with a kid who is going someplace…it may or may not be into an art studio…but i AN tell you it will be doing something creative that will enhance the world we all live in and share. 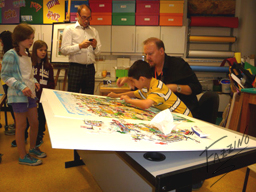 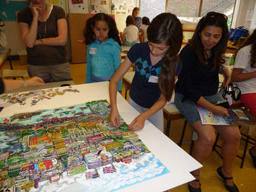 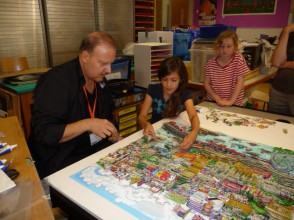