Learn Your Fitness ABC’s with NERDEL

Remember my friend Nerdel? He’s a character i introduced you to in my blogs about the President’s Council on Physical Fitness last year. He’s a wonderfully creative animated character created by DC doctors Robin and Marc Kesselman to promote physical fitness and healthy habits among children…and he does his best to lead by example! Well, since last year, Nerdel has made quite a name for himself and now he’s the star of his own book titled “Nerdel’s ABC Book.” Featured on Amazon.com, Nerdel’s book is a great tool to teach kids about the ABC’s of nutrition, fitness, health…and fun!

Last year, i partnered with Nerdel on his Fazzino President’s Challenge Poster Game, based on my 2008-2009 artwork for the Challenge. You can still play the game at Nerdel.com. Inside informants in Nerdel’s world, tell me that a new game is almost ready to launch…a fully interactive digital game that features my new 2009-2010 poster for the President’s Challenge. I’ll share that link with you when it’s ready for the public to see. It’s very cool and goes a long way to getting kids to pay attention to their own health and fitness.

If you haven’t done so already, introduce your kids to Nerdel! He’s fun, hip, and cool…and his message is one that should be echoed by all of us! Get Fit and Have Fun! 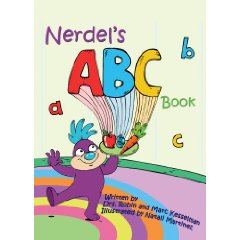