When Charles Fazzino visited Williamsport, PA in February and put on “Fazzinopalooza,” he sent all of the fifth graders from Lycoming County back to their schools with a mission – to create an artwork, inspired by his style and techniques, to celebrate Little League Baseball in their communities. The project is part of the 75th anniversary celebration of Little League Baseball. The resulting artworks will be featured, alongside Fazzino’s works, in an exhibition beginning in July at The Gallery at Penn College. A reception will be held for all of the artists on August 18th at The Gallery as part of a weekend of 75th Anniversary celebration events being attended by Charles Fazzino. 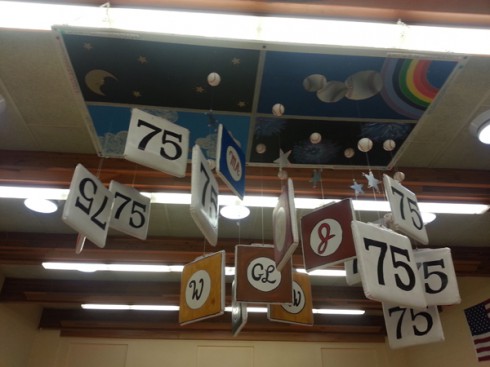 The first project to be completed is a mobile by Mrs. Rider’s art class at Sullivan County Elementary School. We think they did a GREAT job! In their own words:

“The original idea came about while scouring the halls, rooms, and closets of the school, in hopes of finding some sort of baseball gear that was not being used.  We found a box of stadium cushions that were not in use and received permission to use them.  The stadium cushions now take on new life as baseball bases, they were spray painted white by Rusty Lane, who is a member of the maintenance staff.  On one side the 75th anniversary is recognized by painting 75 with black acrylic paint with a top coat of shimmer.  On the opposite side of the “base” each of the 16 regions around the world is recognized for their participation in Little League.

The bases became a mobile by stringing fishing line, the top of the line is attached to luan board, which Patrick Myers made in shop class. The board overhead was painted in the Fazzino style, becoming the sky, overhead.  The entire fifth grade class consisting of sixty students participated in painting the mobile.  Little League baseball’s were hung  overhead and suspended in mid air, as they too were attached on the fishing  line by the fifth graders.  The edges of the mobile are adorned with miniature wooden bats that have been sawed into two pieces; they were also painted in the Fazzino style of painting.  The mobile was successfully hung by the maintenance staff in the elementary cafeteria for all of the students to enjoy.  This summer the mobile will be on display July 10 thru August 16 at the Gallery at Penn College.

The idea of a mobile came about due to the fact Mrs. Rider wanted to show some kinetic aspect of the art work, because of the physicality of the sport.  By showcasing each region of Little League we are referring to Fazzino’s art approach of celebrating the totality of this special event and his approach to his art pieces.  Mrs. Rider shared that the project was an excellent example of how a small community, such as Sullivan County, can come together and work cooperatively for the benefit of all of the students.  She extends a special thank you to her nephew, Patrick, the maintenance staff of:  Rusty, Jim, and Chris, and to all the fifth graders who worked together on this project.”