Charles Fazzino and New Orleans Saints Linebacker Jonathan Vilma unveiled Charles Fazzino’s commemorative 3D artwork for Super Bowl XLVII last night at a fundraiser for the Jonathan Vilma Foundation. The celebrity event held at Morton’s Steakhouse in downtown New Orleans was hosted by Vilma, whose mission is to raise money to fund the construction and maintenance of a school for children in his home country of Haiti. During the evening, Vilma joined Fazzino to introduce the crowd to the artist’s latest Super Bowl XLVII artwork. Fazzino also donated a Super Bowl XLIV Super Bowl print that was autographed by many of Vilma’s teammates, all members of that year’s Super Bowl champion Saints team. Together, the Fazzino artwork raised over $11,000 for the Foundation.

“Jonathan was gracious and very kind to invite us to his fundraiser to unveil my artwork for Super Bowl XLVII,” said Fazzino. “The mission of his foundation is admirable and it was heart-warming to see all of the support he receives from his teammates and the community. I was proud to be involved.”

In the meantime, stay tuned on our Facebook page.  We just might be hosting football trivia challenges on Mondays and giving away Super Bowl XLVII posters! 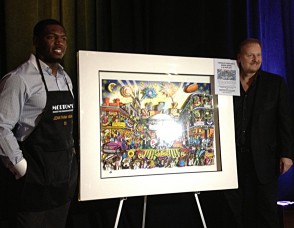 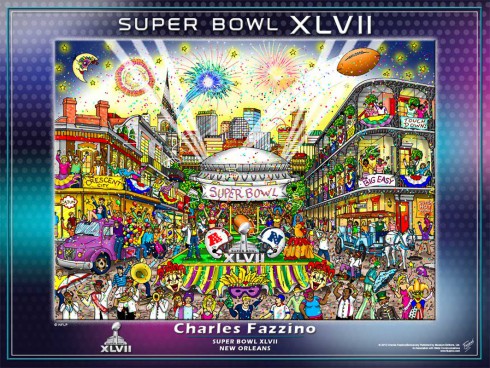 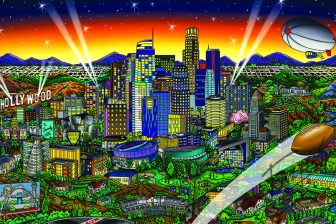