New Rochelle, NY – For the first time in five years, the whimsical and beloved work of internationally renowned 3D pop artist Charles Fazzino, https://www.fazzino.com, will be exhibited in the Boston ares.   One of 50 select exhibitors, the work of Charles Fazzino will be featured at the prestigious AD20/21 Art & Design of the 20th & 21st Centuries & The Boston Print Fair, March 15-18, 2012, at The Cyclorama at the Boston Center for the Arts.

“Moonstruck Over Manhattan” and “Vampires…The Twilight of New Orleans” are two of Charles Fazzino’s latest 3D art releases featuring his foray into black and white technique – a striking and stunning opposite of his usually colorful and vibrant works.

Boston and New England themed art including “Seasonally Boston” and “Fenway Park” will be on exhibit and for sale along with his unique and rarely seen spectacular, hand-painted 3D guitars, the Charles Fazzino unique and colorful Heys luggage line, books, and 3D Patriots and Red Sox sports prints and memorabilia.

Joining the Best of Contemporary Art in Boston

“I am thrilled to be involved with AD20/21 for the first time, this year, “stated Charles Fazzino from his studio. “ I’ve been to Boston so many times and I have a lot of collectors in that area of the country.  I’m happy to see that some of my latest pop art releases will be shown there for the first time. I wish I could be there in person but I know that 3D Studio Gallery will represent the work beautifully.” 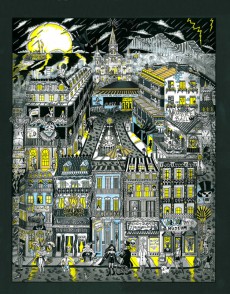 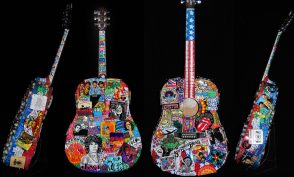