Fazzino Has Emerged as the Country’s Most Prominent Events Artist
Currently working on his 15th Super Bowl to be held in Glendale, Arizona

New Rochelle, NY – – Internationally acclaimed 3D Pop artist Charles Fazzino will make an appearance on Saturday, November 15th, from 6:00pm – 9:00pm and Sunday, November 16th from 1:00pm – 4:00pm at Central Galleries in Cedarhurst, NY. The event will feature the artist’s newest 3D fine art releases including the “It’s A Small World Mural” and “Bright Lights…Big City…Broadway!” Charles Fazzino will be on hand to sign the new pieces, along with a selection of his other limited edition artworks.

“It’s A Small World” is a fun and quintessential Fazzino limited edition, this mural captures the whole world in one full day, moving from night, to daytime and back. Many of the places depicted in the mural have received special Fazzino treatment and now they are all together in one wonderfully detailed and incredibly complex image. 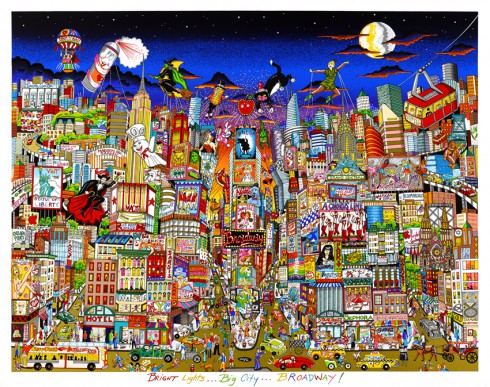