New Works and Experimental Pieces will be Featured

New Rochelle, NY – – Internationally acclaimed 3D Pop artist Charles Fazzino will make an appearance on Saturday, June 6th, from 5:00pm – 8:00pm at The Wentworth Gallery in the King of Prussia Mall. The event will feature the artist’s newest 3D fine art releases including “Midnight in Manhattan” (3D Pop Art Release on Aluminum) , “Cat Scratch Fever” and some never-before-seen original works. Charles Fazzino will be on hand to sign the new pieces, along with a selection of his other limited edition artworks.

Fazzino released the “Midnight in Manhattan” series on the heels of his popular and now sold out release “Illusions of New York.” The series is a departure for the artist, in that he’s experimenting even more than usual with color. The piece is available in four different versions: Black and White, Full Color, Blue Monochrome, Green Monochrome”

“We printed the image out in a whole rainbow of monochromatic colors and the green and blue were the ones I liked the best. So, we’re putting them out there,” commented Fazzino. I think they are very cool and just a touch different while still remaining true to my style of rendering New York City.” 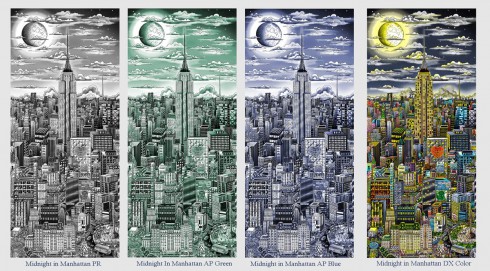 ”Cat Scratch Fever” is a fun and whimsical Fazzino limited edition, featuring our favorite furry felines. “I had to give equal play to the cats,” said Fazzino. “Especially after how well-received our Dog Edition, ‘It’s a Dog Day Afternoon’ was last year.” 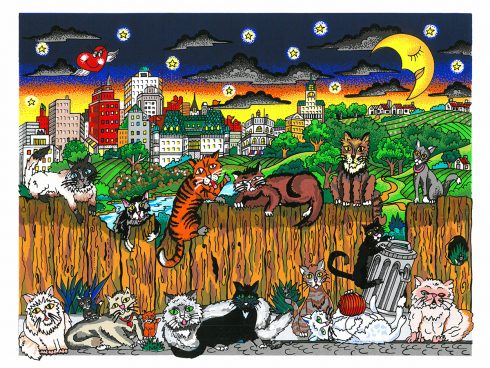 The most impressive original will be a 3-part, 9-foot tall Empire State Building. It will make its public debut at The Wentworth Gallery.

Wentworth Art Gallery is one of the largest retailers of Fazzino artwork in the United States. www.wentworthgallery.com.