This is the first in a series of blogs called, “Fazzino 101.” It’s, “Everything you wanted to know about Charles Fazzino, but were afraid to ask.” In reality, it’s based on a seminar we have given on the life and career of Charles Fazzino, broken down into a few categories: Introduction, How the Artwork is Made, Fazzino and Popular Culture, Fazzino Art and Beyond.

Chances are, you know a talented artist. Just like you probably know a talented musician. There are thousands of talented folks out there… all you have to do is watch American Idol or The Voice to know that. You also know that there are talented musicians who make it and become famous, and there are talented musicians who don’t. Along the same lines, there are talented artists who make it and become famous, and there are talented artists who don’t. The big difference between musicians and artists, especially in America, is that we have a cultural appreciation for musicians. When we say Madonna, or the Beatles, or the Rolling Stones, you know who they are. They are part of the fabric of our popular culture, along with movie stars and theatrical artists. They are our idols and our heroes. We virtually worship them. For visual artists, it’s a little bit tougher to break through that clutter and get to the level of notoriety that Charles Fazzino has achieved. There’s not that many famous artists and most of them are no longer on this Earth. So for Charles Fazzino, being able to achieve the level of fame that he has achieved during his lifetime is quite an accomplishment.

We have a theory as to just how he has established that reputation and gained that respect throughout the global art world.  We attribute it really to three factors: Pure Talent, Unique Style and Technique, and Positioning within the Sphere of Popular Culture.

Whenever Charles speaks to aspiring young artists, he tells them that main key to breaking through is to come up with something unique, something different; a different type of technique, a different type of imagery; a different way of communicating through visual art that hasn’t been done before. Not an easy thing to do. Picasso was the first of his kind and so were Renoir, van Gogh, and da Vinci and more recently, Roy Lichtenstein, Keith Haring, and Andy Warhol. They weren’t only artists, but they were inventors – doing things in art that had never been done before. Charles Fazzino is, by far, one of the most compelling artistic innovators of his time. His style and technique has evolved over time, but his incredibly detailed and vibrant imagery combined with the intricate 3D technique, has steadily set him apart from many of his contemporaries. There is a uniqueness to the work that makes it immediately recognizable and appreciated.

This notion of popular culture is incredibly powerful in our society. Painting what resonates with people brings the artist even closer to his audience and that’s exactly what Charles Fazzino does. He’s spent decades infusing his work with imagery, symbols, icons, and representations of people, places, events, and things that we hold dear. His collection is so comprehensive, that we often refer to him as pop culture historian. When you look at the entire collection, it really tells the the history of popular culture in America, and often-times beyond.

So, from where does Charles Fazzino’s success emanate? It’s a combination of the fact that he is an incredibly talented artist who has developed a signature technique, and has positioned himself as somewhat of a popular culture historian. He’s telling a story… he’s telling our story… and he’s telling it back to us in an intimate and engaging way. In the next part of Fazzino 101, we’ll break down that signature technique and show you how it’s done! 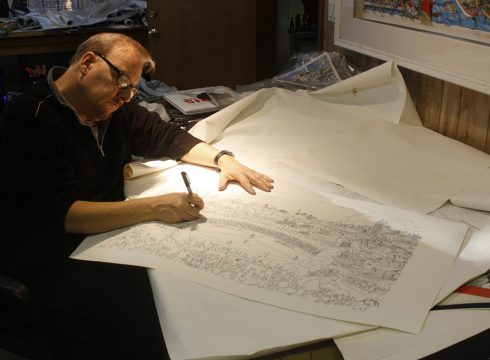