Commission Your Very Own Fazzino

Ever want to commission your own Fazzino original painting? Here’s your chance to do so while helping out an incredible cause.

Charles Fazzino recently created a commemorative Jefferson Awards artwork that was unveiled as part of the 2013 National Jefferson Award Ceremony in Washington, DC. In an effort to support the very important mission of the Jefferson Awards to promote and reward a culture of volunteerism in America, Fazzino has offered up a package for auction on the popular website Charity Buzz.

Until August 14th, you can bid on the opportunity to take a private tour of Charles Fazzino’s personal studios, have lunch with him and his staff, and commission from him your own 3D 8″ x 10″ original painting. Have your life, family, or business celebrated by one of the most popular artists in the world! You tell him what you want in the painting and he’ll do his best to capture the essence of almost any subject you can bring him. This package is valued at $7,000 so get online and bid now. This is a once-in-a-lifetime opportunity to work with Charles Fazzino on your very own creation. 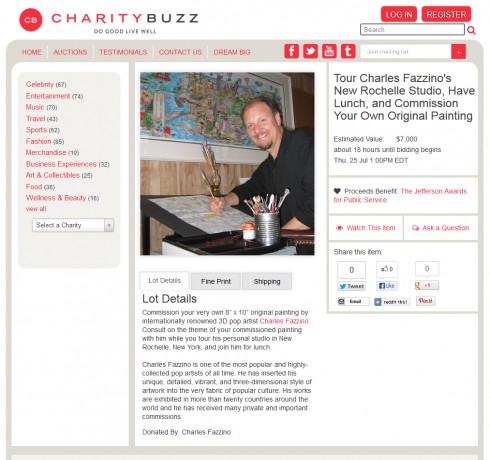 This entry was posted in charles fazzino auction