Charles Fazzino heads back down South this weekend for a series of events sponsored by the City of Fort Lauderdale to celebrate the City’s Official 100th Birthday. He will be attending events at both Fort Lauderdale and Stranahan High Schools, tape a segment on Becon TV’s Teen Talk, be the guest of honor at  a Broward County Education Foundation Reception, host two Wentworth Art Gallery shows, and attend the Centennial Riverfest Celebration.

“I am so looking forward to being down in Fort Lauderdale this weekend,” stated Charles from his studio in New York. “We’ve all been working on this project for about a year now and it’s been an incredible experience. I’m looking forward to celebrating with all of my friends who have been so fabulous to work with. I’m going to miss this project, but it will always be a source of pride for me and i will treasure having been a part of it.”

On Friday, March 25th, Fazzino will visit Fort Lauderdale High School, where he will spend some time with the Brian Fitzgerald’s art students as they continue to make progress on their pop fusion Fort Lauderdale mural. In the evening, he will attend the unveiling of the Dream Catcher mural he has consulted on, created by the talented students at Stranahan High School.

On Saturday afternoon, March 26th, he will host a 3D pop art gallery show at Wentworth Gallery on Las Olas Blvd. in Fort Lauderdale and he will appear again in the evening at the Wentworth Gallery at the Boca Town Center in Boca Raton. He will feature the release of his latest limited edition artwork based on the official Fort Lauderdale Centennial Artwork commissioned last year by the city itself: Celebrating 100 Years of Fort Lauderdale.

On Sunday, March 27th, Fazzino will take part in the Fort Lauderdale Centennial Riverfest, an outdoor street fair and festival taking place from noon to 8pm along the Riverwalk promenade in the heart of downtown Fort Lauderdale. There will be a booth selling his official Centennial posters. Fazzino will be on hand in the afternoon to work with the kids on coloring a huge mural based on his artwork that will later be installed at City Hall. He will join Mayor Jack Seiler onstage for the official Birthday Cake Procession and Cutting Ceremony. 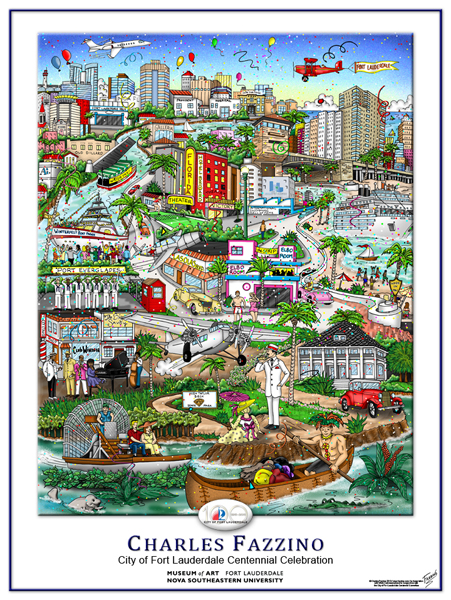