Charles Fazzino recently completed his third European Tour of the year, making appearances at Mensing Galleries in Hannover, Berlin, and Dusseldorf, Germany. While he was there, he was invited to participate in an interactive workshop by Project FUTURE CHALLENGE, an organization that promotes education by bringing noted celebrities and political personalities into the schools.

Thousands of students in Bochum and Wattenscheider City have had the opportunity to interact with people such as Bavarian Prime Minister Edmun Stoiber, Iranian Nobel Peace Prize Winner Shirin Ebadi, US Ambassador Phillip Murphy and many more. The organization operates under the patronage of Nobel Peace Prize winner Shimon Peres and Archbishop Desmond Tutu. FUTURE CHALLENGE sees itself as a link between politics, media and civil society and has made great strides in exposing students to some of the greatest thinkers of our time.

At the invitation of FUTURE CHALLENGE, Charles Fazzino conducted an art project for students at the Pestalozzi Secondary School in Bochum. Together, he and the students created a large apple-shaped, New York-themed 3D artwork. The students also contributed their own works to decorate the matting around the piece – a true collaboration. “It was difficult at first because of the language barrier,” said Fazzino. “But art transcends all and pretty soon all of the kids were involved. We worked together and created together and it was an inspiring experience for me. They were great!” 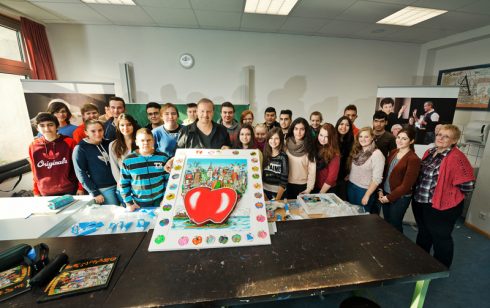