We are smack dab in the middle of the iPad revolution . This little technological marvel is close to becoming another appendage for hundreds of thousands of devoted users. A seemingly infinite number of apps have emerged that basically allows consumers to practically live their lives through the iPad. Today you can almost do anything on your iPad that you do in real life, such as, play an instrument, the piano, the guitar, the drums…the sky is the limit. You can take pictures and videos, you can even turn on a flashlight or strike a digital match.

So, it naturally follows the logic that you can also be an artist on your iPad. Aspiring and professional artists alike are taking advantage of apps like “Draw,” “Sketchbook Express,” “Graffiti Draw” and “Isketch”  to create art on their iPads. In fact, we could be seeing a major shift in the way that art is created as the tech generation really takes hold. Many contemporary artists are actually putting down their pencils, markers, and paint brushes to pick up an iPad. And it’s not just the younger generation. Famous artist’s like David Hockney are even turning to the new technology. Proving that you’re never too old to learn, the 74-year old has been creating art on the iPad since it came out in 2010. In fact, he created an entire exhibition of flower paintings all created on his iPad. The exhibition, titled “David Hockney’s Fresh Flowers” toured the museum circuit in late 2011 and early 2012. 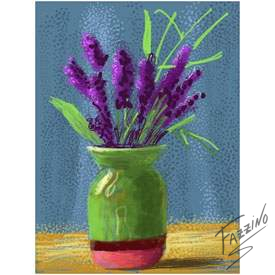 Charles Fazzino has also started to dabble in the tablet-created-artwork world. He has started using “Draw” on his iPad to sketch new ideas and concepts. He then returns to his typical media to translate the iPad creations into finished fine artwork. “When you get an idea, you can jot it down really quick. For an artist, this is extremely important, because it can be very easy to forget an idea – A lot of times I get ideas at very unexpected times and having the option to draw a quick sketch and email it out makes my creativity much more efficient. I’m still learning how to use my iPad to it’s full potential and also how to incorporate it completely into my artistic process but, would love to be able to create full and finished work on my iPad one day.” 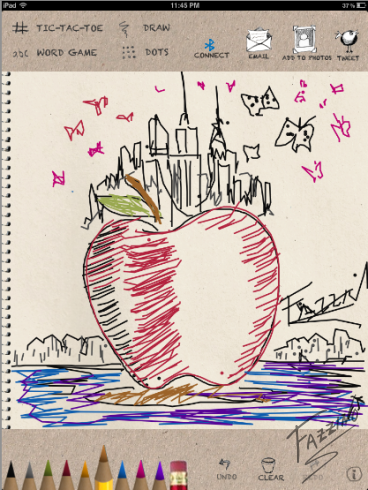 Concept Drawing for Fazzino’s Butterflies Over the Big Apple 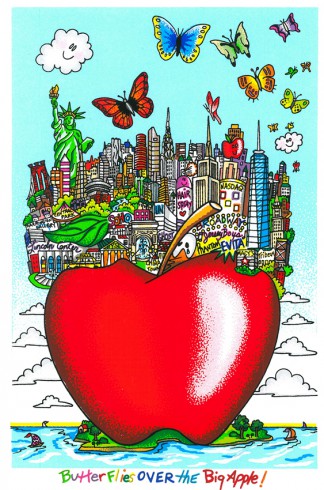 Finalized Artwork for Butterflies Over the Big Apple

Check out Butterflies Over the Big Apple and other new pop art releases from Fazzino!

The new release of the iPad mini is now exploding the tablet market more than ever, by creating a more accessible and less cumbersome version of the iPad.  Give it a try. You might just find yourself turning into a techno Picasso! We also invite artists to check out our new Color Your Own Fazzino app which was designed to work on these devices. Let us know what you think, we’d love to here your feedback.