New Release: Do You Swear to Tell the Whole Tooth

“Do you Swear to Tell the Tooth…the Whole Tooth…and Nothing but the Tooth” is the newest in a long line of satirical, entertaining, and whimsical tributes to the dental industry by Charles Fazzino. Fazzino’s first dental piece “Dentasia” was done in the mid-1990’s after a visit by the artist to the dentist. “I did that piece on a whim,” said Fazzino. “It just hit me as a subject that i could have a lot of fun with…and i did. What happened next was amazing to me. The piece sold out very quickly and collectors started demanding more and more dental artwork. I created my own little niche there.”

Since then, Charles Fazzino has released dozens of limited editions and original paintings about dentistry. He’s combined the Disney characters with dentistry in pieces such as “Visiting the Disney Dentist” and “Disney Dental School.” “Never Long in the Tooth,” “Tooth Story Building,” and “Mouth Under Construction” were highly sought after and sold out in a matter of months after their release dates. “A Dose of Dental Hyjinx” was the most recent release and there are very few left. “Do you Swear….” can be purchased from any authorized Fazzino gallery.

“Do You Swear…” is the newest in the collection. 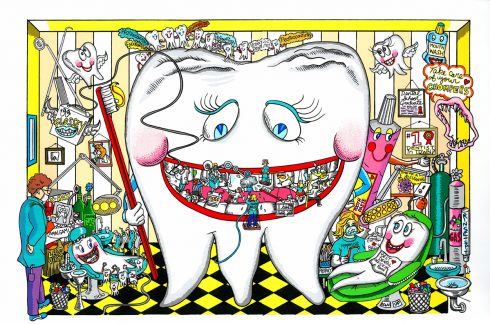 “A Dose of Dental Hyjinx”was released in 2014 all that remains in the edition are a few works on aluminum. If you’re thinking about this piece, don’t miss out! It’s almost gone. 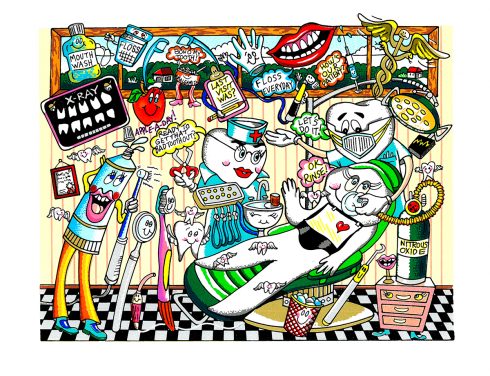 “Mouth Under Construction” was released in 2013 and sold out in a matter of weeks. 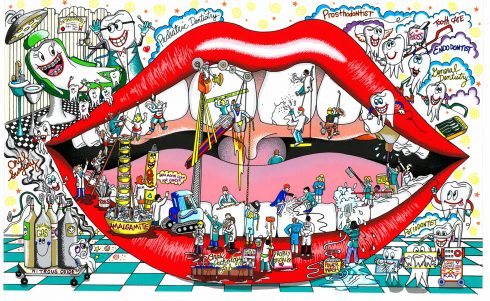 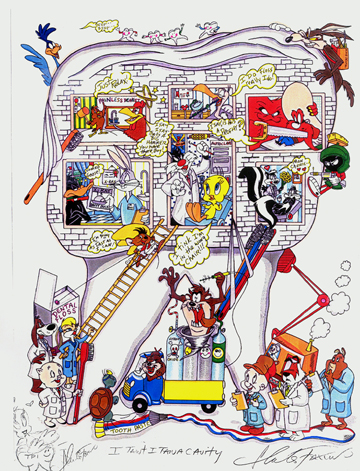 You can see all of Fazzino’s current “workplace art” on our website where you’re find tributes not only to the dental profession but also to the legal, police, real estate, nursing professions…and more!