I came across Christopher Boffoli’s website and just had to share it. This guy is a pop art genius! He’s a writer and photojournalist from Seattle and he’s created a series of photographs he calls “Big Appetites.” Throughout the series, he has posted “small people” with “big food” to create a very smart juxtaposition of images. Add in some witty commentary and you have quite a collection, and the photos make you think, question, and literally laugh out loud. Some of the images are actually quite horrifying when you really think about them…and some are just absurd. The technicality of his images is incredible as well. He’s obviously taken his time with the staging, lighting, and overall composition of his art. To me, that’s what art is….unique, thought-provoking, emotionally charged, and global in scope. These images touch on so many themes and elements common to our everyday culture and that’s what makes them all the more brilliant. I just love them!

In his own words, Christopher tells us about his inspiration:

“The genesis of my Big Appetites series of fine art photographs was in a lot of the media I was exposed to as a child.  There were so many films and television shows that exploited both the dramatic and comedy potential of a juxtaposition of different scales:  tiny people in a normal-sized world.  It is a surprisingly common cultural theme going back all the way to Jonathan Swift’s Gulliver’s Travels in the 18th century and perhaps earlier…When I began shooting some of the very earliest images in this series around 2003, food was a conscious choice as one of the components of the work as it can be very beautiful – in terms of texture and color – especially when shot with available light and macro lenses.  Combining what are essentially food and toys makes the work instantly accessible to virtually everyone.  Regardless of language, culture and social status, almost everyone can identify with toys from their childhood.  And whether you eat with a fork, chopsticks or your hands, everyone understands food.  Sitting down to a meal makes us feel most human.” 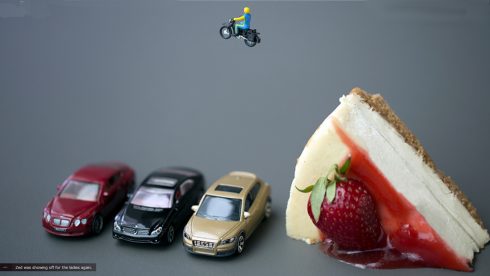 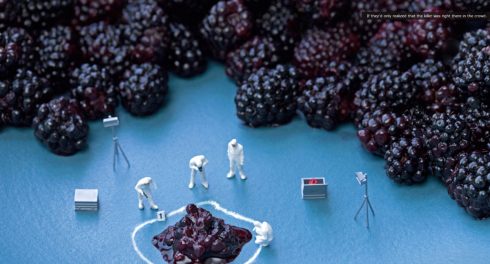