THE Fazzino RIDE Extended Through December! 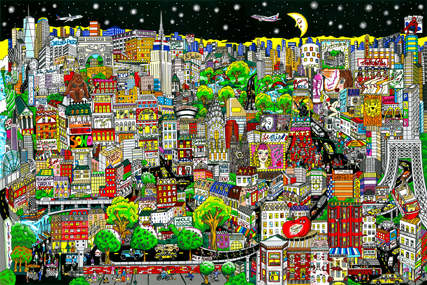 “THE Fazzino RIDE” is one of the most unique ways to tour New York City.  Other tours take a back seat to this fun and innovative new experience.  The Fazzino version of the critically acclaimed THE RIDE tour fleet features a bedazzled custom painted bus as well as commentary from the famed Olympic artist Charles Fazzino.  As if riding in a gigantic work of art wasn’t thrilling enough, passengers on the voyage get an interactive tour of the city that cannot be missed.  THE RIDE is a state of the art SUPER BUS.  The ride itself is filled with colorful characters, fascinating trivia and interactive games that include passerby as well as strategically placed actors.   The experience is as much about people watching as it is about the city itself.  THE RIDE offers a unique opportunity to see the REAL people of New York City.  This tour will give you a greater appreciation for New York whether you are a resident or just visiting.   By the end, no matter where you’re from, you’ll be belting out Sinatra’s ‘New York, New York’ with pride.  Give yourself a treat and take THE RIDE.”

“Part tour, part performance art, THE RIDE is a tour bus on steroids, with three rows of stadium-style seats that face the sidewalk, surround sound, high-tech lighting, TV screens and huge windows that continue onto the ceiling to let you see all the way to the top of the Chrysler Building.  As the tour crisscrosses Midtown, snakes through Times Square, heads up to Columbus Circle and back through Times Square to 42nd and Eighth Avenue it encounters performers along the route; a girl spontaneously tap-dances on the sidewalk; a Times Square ball-drop reveler wishes you a happy new year in midsummer; a delivery guy breaks into a break dance; a ballerina circles Columbus Circle.  Kids will like the unexpected, scanning the streetscape for who might be next to step forward and perform.  Adults should arrange to catch ‘THE Fazzino RIDE,’ which is wrapped in the work of 3-D pop artist Charles Fazzino and features his commentary on why the city that never sleeps is a constant inspiration.” 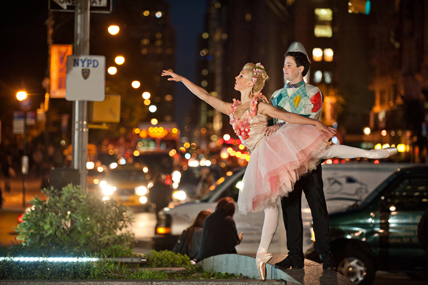 On May 3rd he introduced the star of the Second Season, THE Fazzino RIDE, a new gigantic rolling theatre designed by the Internationally renowned 3-D Pop Artist, Charles Fazzino.

Originally scheduled as a Limited Run, Mr. Humphrey has now extended THE Fazzino RIDE through December 31, 2012 with the option to re-extend through July of 2013.

THE Fazzino RIDE plays/rolls on Friday and Saturday evenings at 8:30pm.

ABOUT THE Fazzino RIDE

THE Fazzino RIDE has been designed as a visually choreographed piece of kinetic art that features new interactive content and street performances allowing the passengers to view New York City through the beloved 3-D artist’s whimsical, original and amusing eyes from their front row stadium-style seats that offer an exhilarating 4-D view.

Mr. Fazzino has created a special design wrap for the motor coach making THE Fazzino RIDE a 75-minute moving work of interactive art.

Written and directed by Richard Humphrey, THE Fazzino RIDE features original content and videos of Fazzino’s universally recognized New York 3-D paintings that jump to life on the forty interactive screens aboard.

THE Fazzino RIDE also features original music composed by Patrick Noth and a new cast of specialty performers who entertain along the 4.2 mile journey through mid-town Manhattan.   Sound has been designed by Brett Jarvis.  The dazzling futuristic lighting design is by Ryan O’Gara.  The state-of-the-art video content has been designed by Rodger Acosta. Motion Graphics and Animations are by Beehive.  The Fazzino Creative is by Leslie Meisel and Daryl Embry.

THE RIDE has become the singularly most requested ticket at Travel Agents’ offices all over the country.  The concept is a brainstorm of design that has resulted in a fleet of multi-million dollar motor coaches whose interiors are a state-of-the-art wonderland of electronic wizardry that guide 49 dazzled tourists around the most fascinating city in the world.  THE RIDE’S original genius was its realization that the streets of Manhattan are a fifty-mile stage exhibiting the most riveting visuals on earth.  Adding its own actors to the crowded mix on the street, the huge motor coaches deliver a show worthy of the standing ovations and group euphoria that results at the end of each RIDE.

The motor coaches are events in their own right.

They are specifically designed theatrical vehicles; the tallest allowed by federal law, fitted with stadium-style seating that orients the 49 fortunate participants sideways so as to look through the massive windows that deliver New York as the most successful Broadway show on earth. These multi-million dollar coaches are equipped with surround sound, LED lighting and 40 video screens.  They are, in essence, rolling state-of-the-art theatres that introduce their travelling audiences to an interactive experience that only the most interactive city in the western hemisphere could deliver.  At the end of the tour, each motor coach’s cargo is encouraged to participate in a rousing rendition of “NEW YORK, NEW YORK”.   They do.   Big time.  With a soundtrack and reverberating karaoke microphones.  You can hear them all over Times Square as they pull in to the finish.    Rock stars, all.

The rapture of THE RIDE is the metamorphosis it delivers.

You get on the bus a tourist. You get off the bus a state-of-the-art New Yorker.

Fridays and Saturdays at 8:30pm 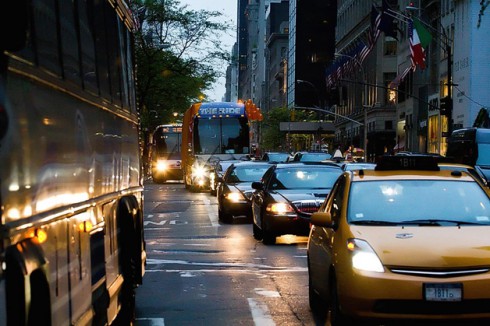