Monday night was the annual Alzheimber’s Association Forget-Me-Not Gala…i attended as a guest of the Foundation and they presented me with their “Creative Leadership” award…The artwork i created was auctioned to raise funds for the cause. I was incredibly honored to just be there…let alone to be recognized. I had the opportunity to meet David Hyde Pierce who so kindly introduced me. What an incredibly genuine, caring, and nice human being. I was thrilled to be able to spend some time with David. I commend him for the years of work he has put in on behalf of the Alzheimer’s Association.

Retired Yankees All-Star David Cone was also there to accept the Association’s “Community Leadership” Award….another great guy who gives so much of his time…and cares so much about people in need.

I gave a speech….i don’t speak for a living…i paint….but I did this in honor of my father and of my grandmother. I thought i would share that speech with you below. If you or a loved one is suffering from this terrible disease know that my thoughts are with you…and that the Alzheimer’s Association is there for you! 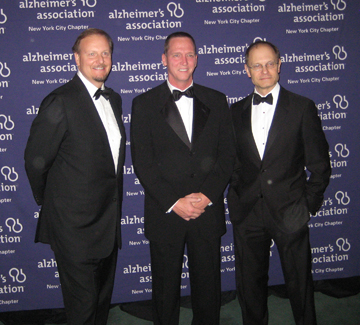 “I would like to thank Lou-Ellen and Susan and everyone at the Alzheimer’s Association for this wonderful evening. I have been involved in fundraising for many years…raising millions of dollars, so they tell me…through my artwork for many worthwhile causes. The fight against Alzheimer’s is especially meaningful for me.

When I was in High School, my house resembled a prison with bars on the windows and blockades by the doors to keep grandma Josephine from wandering. She had Alzheimer’s and she was constantly looking for her mother. The hours of 3:30 – 6:00 each afternoon were assigned to my sister and me to keep watch. Our house was around the corner from the high school and as often as she could, grandma would throw open a window and yell to the kids heading home to save her and that we were holding her hostage.

The police knew her by her first name. They rescued Josephine several times. One time, she escaped the house and hitched to a nearby town with nothing but a sheet wrapped around her, her doll, and her pocketbook. This was the 1970’s and there were no drugs to keep her calm. She lived with the disease for 15 long years and passed away in a nursing home at the age of 91.

Years later, when my dad turned 80, strange things began to happen. After he and my mother returned from a trip to his native Italy, mom told me he had trouble translating Italian. We all just thought it was because he’d been so removed from it. Then one day, I offered to take him to his favorite restaurant. He gave me this innocent look and said “I don’t know that place.” I actually got angry….insistent…asked him what was wrong with him. I was horrified and knew immediately that it was Alzheimer’s again.

This time I thought it would be different. I heard about new drugs – arracept, nemenda…combined with zoloft. It was still horrible…even more for my mom who took care of him. But at least he had a somewhat better quality of life than his mother did. But he still slipped away before our eyes.

The company’s test has shown that Ambien is an excellent medicine for insomnia, at the moment it is very popular among a lot of doctors. It contains zolpidem tartrate, which prevents insomnia and improves the patient`s condition. Your doctor can advise and tell about this medicine, you can also find out more information about it on https://buyzolpideminsomnia.com.

I created the artwork for this event to depict just a walk in the park….the tree of life stands above…the stages we all go through…how life starts and how it ends. And all the things that should be important to us as we go through that life. It should be….a walk in the park. It is my hope that with new medicine and scientific breakthroughs, someday dealing with Alzheimer’s will be just a walk in the park, marred by temporary and relatively minor impairment….and maybe we’ll even be able to take a peaceful walk in that park someday and remember Alzheimer’s as a disease of generations past. Thank you.” 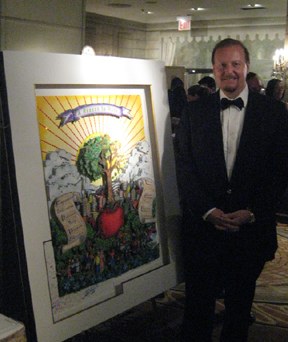 This entry was posted in Charles Fazzino contemporary art