The Perfect Gift for Father’s Day: A Fazzino Collaboration 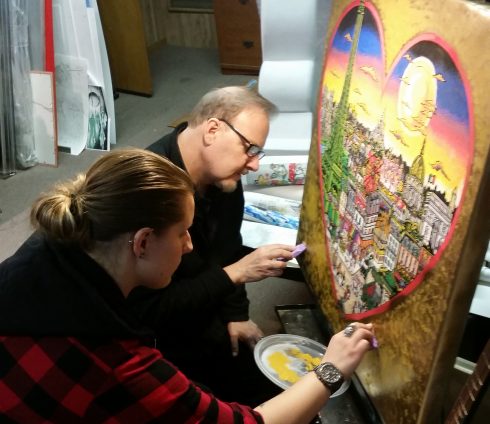 Charles Fazzino knows what he wants for Father’s Day….another chance to collaborate artistically with his daughter, Heather. Together, the two have created a wonderful series of paintings interweaving his detailed 3D pop art style with her more primitive graffiti art style. “I’ve accomplished a lot I my career,” said Charles Fazzino. “But nothing has made me prouder than completing the art pieces that Heather and I have created together.” 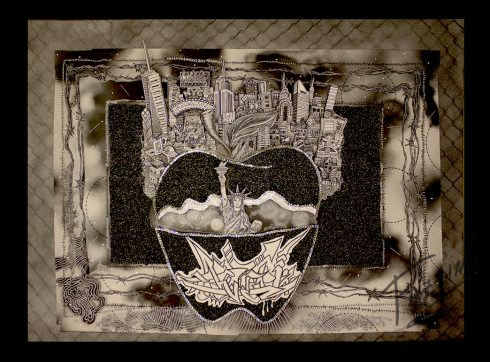 “Tagging the Big Apple” was the first attempt the artists made to work together. It was a massive undertaking with the artists spending more than six months working on a huge Charles Fazzinoesque New York cityscape with Heather providing the black and white, edgy backdrop. This 5’ x 4’ 3D painting recently sold during a New York City gallery show. 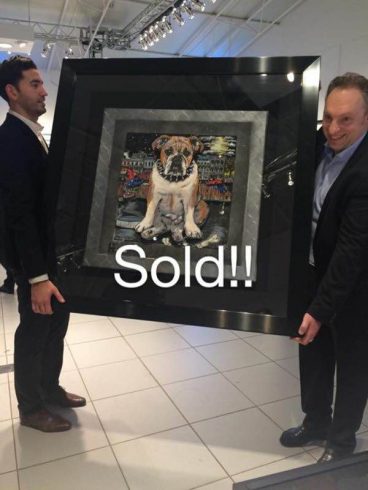 Missy and Oliver Take the Art World by Storm

The first Fazzino and Fazzino collaboration to be snapped up by a collector was actually the first in the duo’s emerging series of paintings featuring Heather’s dogs…Missy and Oliver.  “Junkyard Dog” was sold in Paris during one of Charles Fazzino’s appearances there in late 2015. “It was amazing really. The very first painting sold at the exhibition was the one Heather and I created together,” said Fazzino. “It certainly gave us the inspiration to continue the series.” 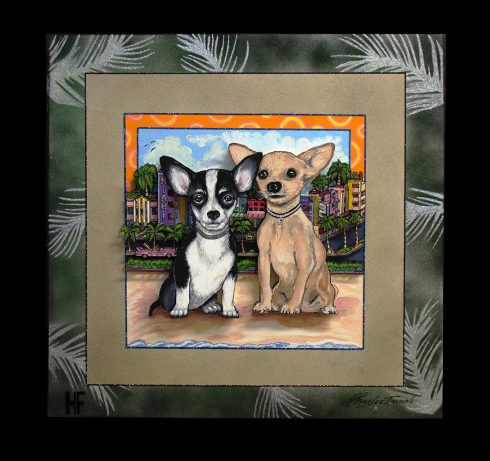 Since then, the two have created “Oliver in Paris” and “Chihuahuas in Miami,” both of which feature Heather’s unique dog compositions in the foreground and Charles’s cityscape treatment in the background. The marriage of the two styles has been magical. And of course, all of the works are three-dimensional.

What they have Learned:

“It has been so cool working with Heather. How many fathers get to not only work with their daughters, but learn from them too,” said Charles Fazzino. “I’ve learned a lot….especially about spray paint. It’s a medium I never considered before and the textures and looks you can create are just amazing.

“I’ve even started incorporating some of Heather’s style into my own works. For example, I recently completed a painting of Berlin and the whole bottom section is really a tribute to Heather’s sensibility. I rendered the Berlin wall in a whole new way for me….it’s sort of done in a reverse relief. That was Heather’s suggestion and it looks so cool.”

According to Heather, “It’s awesome being able to work with my dad – it’s always an interesting process when we work together. We are polar opposites in how we work.  I like to create something and hang it on the wall half-finished for a week just to see what I think it’s missing. My dad always has a plethora of inspiration to start and finish his vision of each piece in one sitting. So a lot of times we will start a project, and then I’ll want to change things as a piece develops and it makes him crazy! My dad was the one who inspired our collaborations, to see how putting a spin on each other’s work would turn out.  But it’s been great combining our styles and love for art.”

Happy Father’s Day to all you dads out there. May you have as much love, inspiration, and respect in your relationships as the Fazzinos have In theirs!