The three-dimensional limited edition consists of 100 Deluxe prints at an image size of 12″ x 16.5″. Contact your favorite Fazzino dealer for pricing and availability or email us at info@fazzinocollectors.com for more information.

The two NBC collectors pins are the next in a series of collaborations between Fazzino and the Olympic Games Broadcasting Network that began in 2004 with the Athens Olympic Games. The first is a four-layered pin in the shape of a snowflake that captures the beauty of Vancouver and the Majesty of Whistler Mountain. The scene is completed by athletic figures representing the competitions that will take place.

The second pin is a 4-layered product of the artistic and cultural collaboration between Charles Fazzino and renowned Squamish First Nation artist Xwalacktun. Fazzino’s inspiration comes from the physical characteristics and landscape of Vancouver, while Xwalacktun shares with us the traditional cultural icons and imagery passed down to him by his ancestors, his family, and his community.

These pins are exclusively available through NBC and can be ordered at www.nbcuniversalstore.com 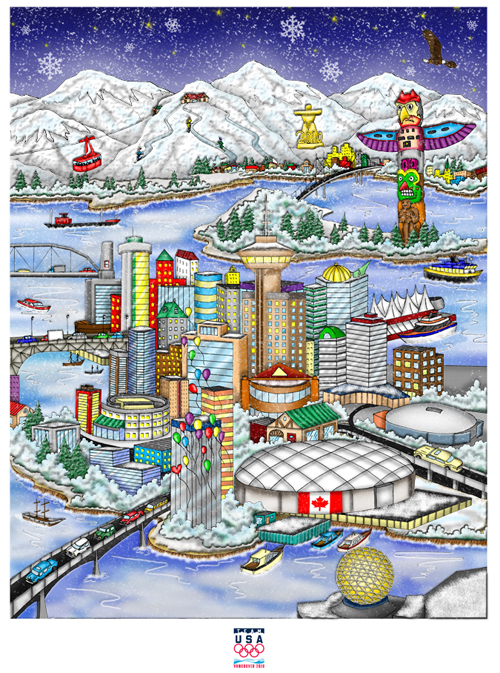 This entry was posted in Olympic art