The first major museum exhibition of Charles Fazzino artwork in Germany will take place at the beginning this weekend at the International Art Academy Heimbach / Eifel.  From April 27th through June 22nd, the Academy, housed in a historic medieval castle, will showcase more than 150 works by the famous American pop artist.

Earlier this year, several dignitaries from Kreis Duren visited Charles Fazzino at his NY Studio to formally invite him for the exhibition. “I was honored to be invited by the district of Duren to exhibit my works in the Castle,” said Fazzino. “I have been showing my work in Germany for decades and this is particularly special, in that it will involve putting most of my entire collection together in one place. The setting is beautiful and the people have been incredibly welcoming. This should be quite spectacular. I’m very proud.” 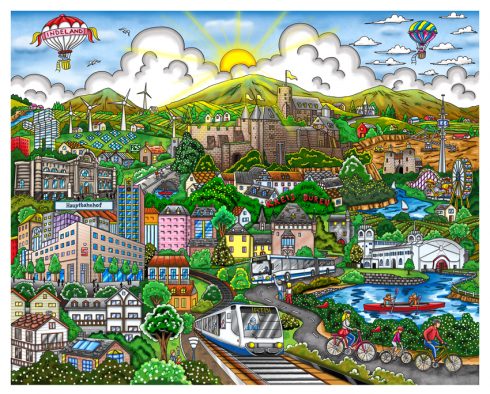 For the Love of Kreis Duren

Wolfgang Spelthahn, the District Administrator of Duren and the patron of the exhibition, has also announced an art contest for students to coincide with the Fazzino exhibition. The theme of the competition is “A world in 3D – the Great Charles Fazzino Painting Competition” and will be open to students in the primary and secondary schools, and the vocational colleges in the districs of Eruen, Euskirchen, and Heinberg.

Attendees to the exhibition will also have the opportunity to view and purchase the artwork Charles Fazzino created in tribute to the area: “For the Love of Kreis Duren.” It’s a vibrant and detailed celebration of the diversity and magic of this very special area of Germany.

What: Charles Fazzino – The Exhibition

Open Daily from 10AM until 6pm and until 10pm on Thursdays. Admission for children up to 18 years is free.