Charles Fazzino heads back to Williamsport this weekend for events surrounding the unveiling of his 75th Anniversary artwork for Little League Baseball. He will preside over a formal unveiling ceremony, conduct several autograph signing sessions and attend a reception at The Gallery at Penn College. Of course, he’ll also take in a few games of the 2014 Little League World Series! 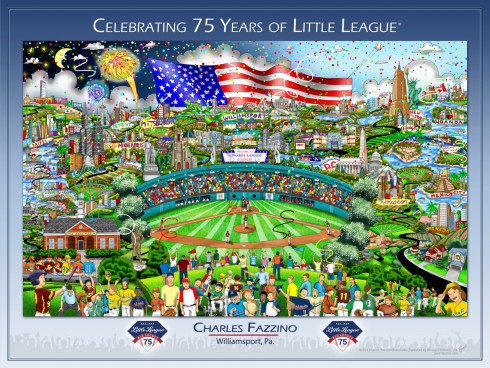 The original painting done by Fazzino in collaboration with a group of fifth grade students from Lycoming County will be officially unveiled during a ceremony at the World of Little League Rotunda Theater on Saturday morning. Charles Fazzino will then sit for signings according to the following schedule:

1pm-2pm at the World of Little League Official Store

4pm-5pm at the Stadium Store

1pm-2pm at the World of Little League Official Store

4pm-5pm at the Stadium Store

Several of the students and teachers who put in months of work on this project will join Charles on the field prior to the Saturday evening game to throw out the commemorative first pitch. It will be the first time the kids have been with Fazzino since his visit to Williamsport in February of this year.

On Monday, August 18th from 5pm-7pm, Charles Fazzino will host a meet the artist reception at The Gallery at Penn College. The “Collective Pop” exhibit features works by Fazzino and by the fifth graders throughout Lycoming County who participated in several  75th Anniversary of Little League Art Projects.  The reception is open to the public and admission is free.

Hope to see you there!