New Rochelle, NY – Internationally acclaimed 3D Pop artist Charles Fazzino will make his only Washington, DC area appearances of 2013 at the Wentworth Art Gallery in the West Field Montgomery Mall on Saturday, July 26th, from 1:00pm – 4:00pm and the Wentworth Gallery in Tysons Galleria also on Saturday, July 26th, from 6:00pm – 9:00pm. The events will feature the artist’s newest 3D fine art releases including the “It’s a Small Word Mural” and “Il Sole Brilla su Venezia” (The Sun Rises Over Venice). Charles Fazzino will be on hand to sign the new pieces, along with a selection of his other limited edition

”It’s a Small World” is a fun and quintessential Fazzino limited edition, this mural captures the whole world in one full day, moving from night, to daytime and back. Many of the places depicted in the mural have received special Fazzino treatment and now they are all together in one wonderfully detailed and incredibly complex image.

In his new release “Il Sole Brilla su Venezia”, Fazzino visually pays tribute to his 1995 release “Angels Over Venice”, one of his earlier and most popular renderings of Venice, Italy. “Venice is one of those magical places,” said Fazzino from his New York studio. “The juxtaposition of the city with the water and the gondolas always makes for such a pretty composition. I hope you like it.” 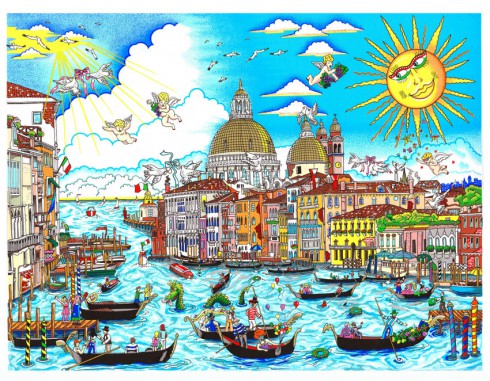 “I am excited about my appearance at Wentworth Galleries in both Bethesda and McLean,” stated Charles Fazzino from his studio. “I’ve been doing shows at both locations for more than a decade now. It’s nice to go back there to meet so many people who have collected my work over the years and are now loyal patrons of Wentworth Gallery.”

This entry was posted in Wentworth Gallery