New Rochelle, NY – – Internationally acclaimed 3D Pop artist Charles Fazzino will make his first Wentworth Art Gallery appearance of 2013 at the Wentworth Art Gallery in The Woodfield Mall on Saturday, February 16th, from 5:00pm – 8:00pm. The event will feature the artist’s newest 3D fine art releases including “A Deep Dish Pie in Chi-town” and “Google It…Facebook Me…Tweet It…LOL…OMG.” Charles Fazzino will be on hand to sign the new pieces, along with a selection of his other limited edition artworks.

“A Deep Dish Pie in Chi-Town” is Fazzino’s latest tribute to the Windy City. Full of vibrant color and exceptional detail, this limited edition fine artwork captures nothing less than the Best of Chicago.

“Google It…Facebook Me…Tweet It…LOL…OMG”  is  Fazzino’s  social commentary on the tone of the times – a striking yet whimsical statement about the impact that social media has had and continues to have on our everyday lives. Done in Fazzino’s innovative 3-D pop art style, it plays with the culture’s obsession with their alter-egos…..their internet lives. 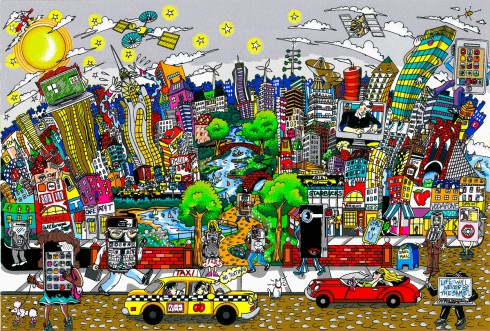 “I am excited about my appearance at Wentworth Gallery in Schaumburg,” stated Charles Fazzino from his studio. “I’ve been doing shows there for more than a decade now. It’s nice to go back there to meet so many people who have collected my work over the years and are now loyal patrons of Wentworth Gallery.”