2019 Charles Fazzino Award of the Heart

The 2019 Charles Fazzino Award of the Heart was handed out at the end of the last academic year and we are so proud of this year’s recipient. This award, given annually by Project Community, Inc was named in honor of the international pop artist whose sensitivity to community needs has made him a valued friend of Project Community, Inc. for over 30 years. The award recognizes generosity of spirit, creativity and resources that support innovative programs that inform and offer practical choices to prevent illness for children, teens and adults. 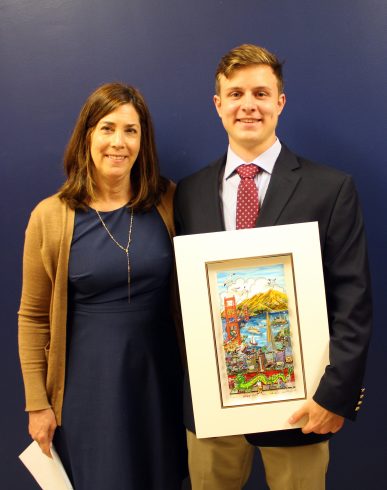 The award was given to an outstanding young man named Andrew Clausen. According to Project Community’s Susan Deland:

“Andrew Clausen, who is off to Trinity College this fall, originally attended the Project CHILDD Sunday afternoon monthly program with his brother, Nick, who received the Fazzino award himself a few years back. Andrew exudes calm and kindness, and the special needs children with whom he interacts at the program definitely pick up on that.

When I was speaking to and trying to recruit more Teen Mentors from the Pelham Memorial High School’s Community Cares community service club, I called on him to explain why he was involved, and had been involved for several years, and he said. “I like it.” That may seem like an overly-simple answer, but it spoke volumes to me. That’s because it’s not an easy 2 1/2 hours some months….the kids can be upset because of separation from their parents or because of behaviors or noise from other kids. For Andrew to say he likes being there means a lot. Too many of the volunteers are there to fulfill the mandatory community service hour requirement for graduation or to puff up their college applications. I know that Andrew is there to be a friend and role model to kids who don’t have that opportunity, ever.

Project Community, Inc is proud to have chosen Andrew to receive this gorgeous piece of art! Thank you so much to Mr. Fazzino and all of you for providing this tribute that is unique and everlasting.”

In his thank you letter to the Board, Andrew wrote “I very much enjoyed my time as a teen mentor at Project CHILDD. I learned as much from the kids as hopefully they did from me.”

We’re proud of you! Congratulations Andrew! 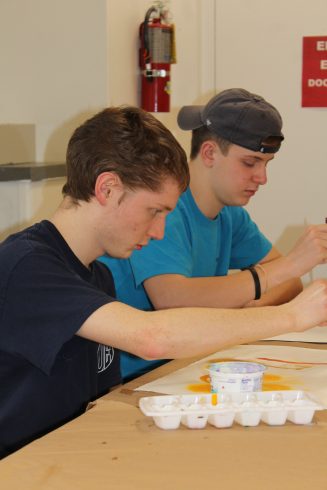